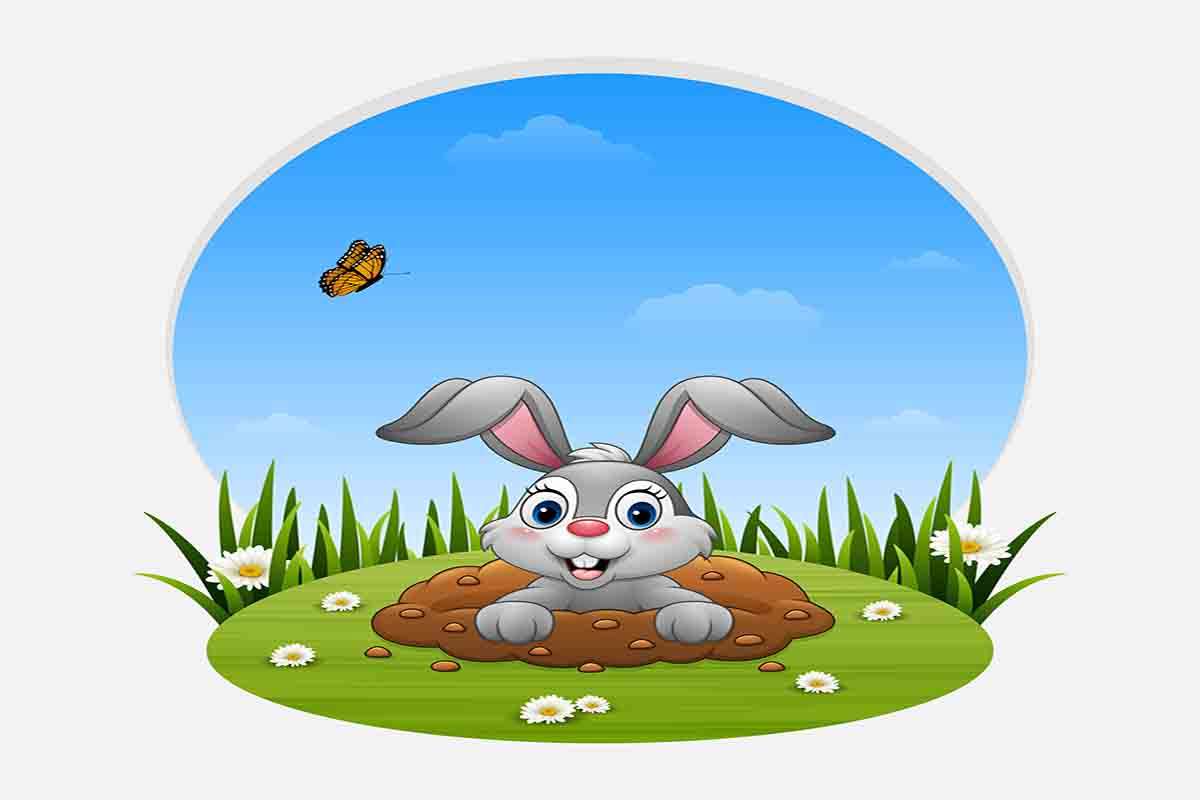 Beyond the Easter Bunny: 20 Other Famous Rabbits

This Easter, we rounded up some of our favorite fictional rabbits and bunnies from cartoons, books, and movies!
Stefanie Miller

Did you know that many famous rabbits are arguably more popular overall compared to the hopping bunny that brings our little ones baskets of treats every Easter? Many famous rabbits have become pop culture icons that everyone recognizes, reminding us all that the Easter Bunny isn't the only well-known rabbit. Even though come springtime, he is the one who gets all the press. What makes these other fictional rabbits just as if not more famous than the Easter Bunny?

Well, they are seen in all sorts of media and their popularity has stood the test of time. A good example of this is Bugs Bunny. He is one of the most famous cartoon characters ever and has been on our TV screens for decades. Everyone knows who Bugs Bunny is, even young kids! Another example is the Cadbury bunny. Everyone has seen the commercial around Easter of the lovable little bunny making clucking noises and promoting those delicious Cadbury cream eggs. It just goes to show how much of an impact something so simple can make.

We did a roundup of our favorite famous bunnies, just for fun. Below you will find a list of 20 famous fictional rabbits. Some of them you may recognize, and some you may not.

1. The White Rabbit (Alice in Wonderland)

The White Rabbit is the reason Alice finds herself trapped in Wonderland when she follows him down his rabbit hole -- a phrase now used to describe getting trapped in a crazy and inescapable task. He is famous, too, for muttering about being late as he makes his way through Wonderland. Alice's Adventures in Wonderland is one of the most famous novels written by Lewis Carroll and has been adapted into many different film versions that are adored by many.

English author Beatrix Potter created several animal protagonists for her stories, but none is more famous than the jacket-wearing, veggie-stealing Peter Rabbit. Peter hit the big screen earlier this year, introducing himself to a new generation of fans. The first edition of this beloved novel was published in 1902, proving that is a timeless classic that all generations enjoy.

The Energizer Bunny has been going (and going ... and going ...) since his debut in 1988, but did you know he began as a parody of the then-mascot of rival company Duracell? Outside of North America, Duracell continues to use the pink “Duracell bunny” as their mascot to this day. The reason that Energizer snatched up this adorable bunny as their own is that Duracell's trademark has lapsed in 1988, making it up for grabs.

This famous bunny of the Hundred Acre Wood may seem like a bit of a control freak at first, and maybe a bit too protective of his carrot garden. But deep down he has a big heart and would do anything to help his friends. You can find Rabbit in all of the countless Winnie the Pooh books, TV shows, and movies that date back to the 1920s when the story was created by A.A. Milne. All rights to the character and stories were purchased by Disney in 1961. The character Christopher Robin was based on Milne's son, Christopher Robin Milne.

>5. Snowball (The Secret Life of Pets)

The "youngest" bunny on our list, Snowball made his debut in 2016’s The Secret Life of Pets. Though he begins his story hating humans and hell-bent on world domination, everything changes when he meets Molly, the little girl who adopts him and promises to love him forever. This lovable bunny is voiced by actor and comedian Kevin Hart and can be seen in the sequel The Secret Life of Pets 2 as well, which premiered in 2019.

Expertly melding animation with live-action, Who Framed Roger Rabbit? is a quirky take on the Golden Age of animation. Amid a supporting cast of classic Disney and Warner Bros. characters appearing together for the first time, not to mention wife Jessica Rabbit, who’s "not bad, just drawn that way," the manic Roger Rabbit escapes injustice and helps improve "human-toon" relations. The cast includes big names like Christopher Lloyd, the late Bob Hoskins, and Charles Freischer who voiced Roger Rabbit.

Considering all of the devastating moments in Bambi — I still leave the room during the death of Bambi's mom — Thumper is memorable for his good cheer as much as for his signature foot-stomping. And who can forget Thumper teaching Bambi how to ice skate? This foot-thumping rabbit is also famous for "Thumper's Law" which is "if you can't say something nice, don't say nothing at all."

This famous rabbit may be the winner of the "rabbit most likely to make grown adults burst into tears" award. In this heartwarming story, a boy’s favorite toy becomes "real" through his love for it, and they love the rabbit has for the boy. The Velveteen Rabbit is a children's book that was written by Margery Williams in Britain and published in 1922. It has been republished several times since then, and will likely continue to be because of its popularity.

This cuddly white bunny clucks like a chicken and has famously returned every Easter to sell Cadbury Creme Eggs since the '80s. Though other animals, such as cats, turtles, and even lions have auditioned to be the Cadbury Bunny, the fluffy white clucking rabbit always wins out. It's silly, cute, and we will likely see these commercials continue for years to come.

What’s up, doc? Bugs is probably one of the most famous rabbits around — a true American icon. Since his introduction in 1940, his mischievous antics have delighted millions. Since then, there have been several TV series, shorts, video games, and movies that include this silly bunny. His cleverness and wit always seem to get him out of trouble and allow him to outsmart some of this rivals like Elmer Fudd and Yosemite Sam. Mel Blanc is one of the most well-known actors to take on the voice of Bugs Bunny.

If you are a millennial, one of the most well-known children's TV series on PBS was Arthur. It follows an aardvark named Arthur Read and most of his adventures include his best friend, the quirky white bunny Buster Baxter. His love for food and friendship make him one of the most iconic cartoon characters in the childhood of a millennial.

Seen in the classic movie Space Jam and originally voiced by Kath Soucie, Lola Bunny is a female rabbit created by Warner Bros in the 1990s. Her first official appearance was actually in a comic book called Bugs Bunny Comic Book #108. She is a confident female character and the love interest of Bugs. You also can see her in the more recent film Space Jam: A New Legacy and voiced by actress Zendaya.

This little trickster that is also known as "Brother rabbit" is a fictional figure that is the center of traditional folklore told by Southern African Americans. These stories of a little rabbit that uses his clever mind to push the boundaries set by authority originate back to Africa in the 1800s. Joe Chandler Harris wrote several books about Brer Rabbit.

Oswald the Lucky Rabbit was created in the 1920s by Walt Disney. He is seen in several animated shorts before he was later replaced by one of the most popular cartoon characters of all time- Mickey Mouse. Oswald was sold to Universal Pictures since they were looking for a way to break into making cartoons of their own.

"Silly rabbit, Trix are for kids!" If you have eaten Trix cereal then you are probably familiar with the white rabbit on the box. The sweet, fruity cereal dates back to 1954 when it was first created by General Mills. The Trix Rabbit made its debut on TV screens in 1959 and has been in commercials for the popular cereal ever since.

Skippy Rabbit is a supporting character in the Disney animated film Robin Hood. He isn't seen often, but when he is, his sisters Tagalong and Sis aren't too far behind. From shooting an arrow into Little John's courtyard to ending up behind bars due to non-payment of taxes, this 7-year-old rabbit gets himself into quite difficult situations.

This character was created by author Thorton Burgess. The Adventures of Peter Cottontail was written in about 1914 and it follows a little rabbit's life with his friends. The name of this character is Peter Rabbit and is drawn inspiration from the work of Beatrix Potter. Burgess' son chose the name for this character and it eventually goes back and forth between that and Peter Cottontail. Gene Autry recorded the holiday song "Here Comes Peter Cottontail" in 1950 and has become an alternate name for the Easter Bunny.

The animated movie Zootopia follows a little bunny named Judy Hopps who becomes a police officer despite always being told she was too small to make a difference. She goes on to defy the odds and solve a big case that allows everyone to see what she is capable of. It is a fun and charming Disney film that has become very popular.

Hazel is the main antagonist of the novel Watership Down by Richard Adams. It follows the lives of a group of bunnies that live in southern England. The store surrounds Hazel who is a buck rabbit and his brother Fiver who are trying to convince their warren to evacuate because Fiver had a premonition of their warren's destruction but are rejected by the other bunnies. They decide to go off on their own and form their warren with a few other followers. This novel is Richard Adam's debut.

The March Hare is another character in Lewis Carroll's Alice's Adventures in Wonderland. he is introduced in the famous tea party scene, where he is seen enjoying tea with the Mad Hatter. The phrase "as mad as a March Hare" originates from this book because it was said that a March Hare is as mad as they come. He also makes an appearance in the film adaptations as well as Through the Looking Glass, which was also written by Lewis Carroll.

Several famous rabbits have hopped their way through Hollywood, proving that the Easter Bunny isn't the only one that kids recognize. From commercials to books, to TV series and movies, there are so many lovable rabbit characters!