Learn the rules and strategies that can help you win the fun card game called Spit.

Rules and set up

When I was about 12 years old, I spent an entire summer in the country playing Spit with my best friend. I'm not exaggerating. Every day for two and a half months my friend and I played Spit while watching TV on rainy days or hanging out at the lake when the weather was nice. We were excellent opponents. We knew the game cold; we knew each other's tricks and maneuvers. We had rules established to avoid the whole card-messing scenario that my parents used to indulge in, and we even made up several of our own rules as we went along.

I considered myself a highly skilled player. I could move those cards so quickly—it became quite an art. I'd like to say I was a great painter or mathematician—it would be a much more interesting way to portray myself to the general public—but I was a talented Spit player. I'd also like to say I was better than my friend, but in truth, it's a tough call. We were both so good at it that taking on any other opponent was rather dull—and besides, another opponent would have thrown off my momentum.

Spit is basically “speed” Double Solitaire with a twist. You may want to teach your kids how to play Solitaire before teaching them this fast-paced version. It is played with two people, and the object is to move quickly and be the first one to eliminate cards from both your tableau and your stock pile. You don't take turns—you play at the same time. The idea is to be faster than your opponent; you have to have a quick eye to see your moves before they happen, and an even quicker hand to get your cards onto the foundation piles.

Try to find an old beat-up deck for Spit. There are two reasons for playing with an old deck: First of all, your cards are going to get damaged in the craziness. And second, you'll be able to get a better grip on the cards if the deck is a little used. If it's a new deck, the cards will slide all over the place and you won't be able to move them around as quickly.

Split the deck so that you each have 26 cards. You each then set up your own tableau by dealing out five piles in front of you—cards face-down. On the first pile you will have one card, on the second pile two cards, on the third pile three cards, and so on. When you are done, turn up the top card on each of these piles. You will have 11 cards left in your hand (stock pile).

Begin to play as though you're playing Solitaire. The cards on the tableau are played by rank in descending order—alternating between red and black cards. Suit is not relevant on the tableau.

Don't turn any cards from your stock pile until you and your opponent are finished making changes to your respective tableaus and you're both ready to “spit.” 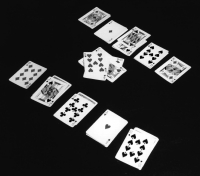 Sit opposite your opponent and set up your tableau.

You will have 11 cards remaining after you lay out your tableau. These cards should be held in one hand, face-down. You will use your other hand to turn the cards one at a time. The cards you turn over are your “spit cards.”

Here's the “spit” part: Before you turn the spit card over (face up), you and your opponent must say “spit” at the same time. What my friend and I used to do—just to be sure that we were both ready—was say “One, two, three, spit!” turning the card over on the word “spit.” “Spit” basically means “go” (but isn't it way more fun to say “spit” than “go”?). By saying “One, two, three” before the word “spit,” there is no question about one person turning a card before the other player was completely ready.

You cannot look at your stockpile until the top card is turned after saying “spit.”