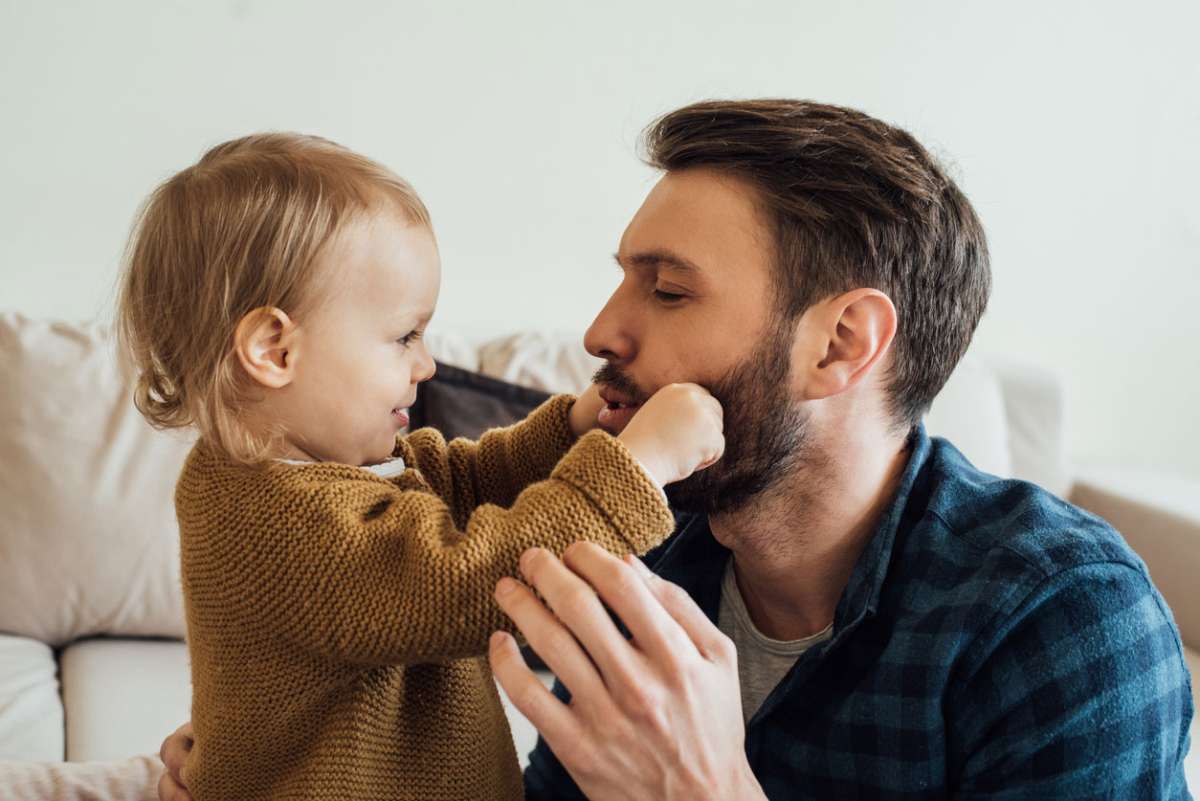 3 Traits Babies Inherit From Their Father

Do you ever wonder what traits kids get from which parent? Here are three physical and personality traits your baby will inherit from their dad.
Kristina Cappetta

This article was medically reviewed by Dana Bressette. Dana is a professor of Genetics, Nutrition, Microbiology, and Immunology at University of Phoenix and a Family Education expert.

"He's tall like his father." "She has brown eyes like her father." "He gets his blue eyes from his dad." These are just a few things you hear people say about kids and the inherited traits that kids get from their fathers.

Whether it's genetic traits or physical traits like hairline, eye color, hair color, or a specific personality trait, parents are always looking for what traits their baby boy or baby girl has that resemble their own. We're going to take a look at eight traits babies inherit from their father, so dad can proudly say his kiddo is just like him!

A Quick Look at Sex Chromosomes

The very last pair (pair 23) is the sex chromosome, and it can be XX or XY. Other chromosomes can have mutations that are expressed as various conditions like Down syndrome, sickle-cell disease, or Fragile X syndrome.

Are Mom and Dad Equal with The Traits They Give Their Child?

Many of us think everything is 50/50, with each parent giving an equal amount of physical traits and genetic traits to their child. But, that's not the way things work. The truth is things are a bit unfairly swayed to the dad’s side. You are 60% more likely to have traits that are “active” from your dad simply because nature has a natural preference to express those genes. That's what it means to have strong genes.

This is due to complex epigenetics or the way your DNA is expressed. Epigenetics plays a role, of course, in your eye color and the way you look physically, but it also impacts your health and wellness. For example, a parent’s genes and the strength of those genes can influence the severity of a health condition in your child.

When you're talking about traits that babies inherit from their fathers, it's important to understand dominant and recessive genes. Different versions of a gene are called alleles. Alleles are either dominant or recessive depending on their associated traits.

Dominant genes let their presence be known even if it comes from only one parent. Whereas recessive genes would have to be present in both parents for the baby to end up with that eye color.

Physical appearance as a whole is heavily biased towards the father's genes and not the mom's genes.

There are at least 700 genetic variations that are responsible for determining height. While this trait comes from both mom and dad's genes, there is evidence to show that a dad's genes play a greater role in the height department.

Researchers look at the insulin-like growth factor (IGF protein) when talking about height. This is the genetic trait that is responsible for promoting growth. A woman's genes have a contradictory receptor called IGF2R. The imprinted gene is marked by the origin parent from the beginning. It marks mom's copy and dad's copy of the allele. The stamped gene and inherited trait are expressed differently. It depends on which parent they came from, or if they're only inherited from one parent and not the other. The father's IGF genes can help a child grow tall while the mother's IGFR2 genes can stunt growth.

If Dad's ever disappointed by not having a little boy or girl, that's on him! Men are responsible for determining the biological sex of a baby. (So there, Henry VIII!.) Men contribute a Y chromosome for boys and X chromosome for girls. According to medical research, a man's X and a woman's X combine to become a girl, and a man's Y combines with a woman's X to become a boy. But if the sperm don’t have equal Xs and Ys, or if other genetic factors are at play, it can affect the sex ratio.

Researchers also found that the sex ratio for families followed the father's side, not the mother's side. For example, if a man had more brothers, his own children were more likely to be male; if he had more sisters, he was more likely to have daughters. However, this link was not the case for women.

If a man becomes a father later in life, there is less quality sperm. This is one of the reasons why older fathers can pass on mutant genes to their children which can lead to mental illnesses or mental health issues. This means children can develop conditions such as hyperactivity or bipolar disorder. Children born to parents over 45 can also be more likely to have learning difficulties and perhaps suicidal tendencies.

However, recent research has noted that genetic influence on mental disorders may be less strong since previously thought. Mental disorders have a genetic link, but it is only 10-20% with a variety of other factors influencing mental health.

The next time you look into your baby's dark eyes or wonder how they got so tall, you can thank their father! There are many traits babies inherit from their fathers as well as many traits they can thank their mothers for. There are also many personality traits that babies will develop as they go along in life. Whether your baby is the spitting image of dad, just like mom, or a mix of both parents, the important thing is to embrace all sides because every trait makes up the little person that is your baby girl or baby boy.