Croquet is a familiar and fun outdoor game for everyone. Here are the official rules.

Croquet is a great game to have set up and ready to go for a backyard barbecue. It's a slow game of patience and precision and a great way to spend time chatting with your friends as you work your ball through the course. Croquet may be an ancestor of Billiards and Golf. The goal is to use a wooden mallet to hit a ball through a hole. Sound familiar?

Croquet has its origins in France and dates back as far as the thirteenth century. It migrated to England in about the sixteenthcentury and is still a popular game today.

The game is fine for kids to play—as long as they are big enough to hold the mallet; they are old enough to play.

You can play the game with two to six players. You can play in teams or as individuals (otherwise known as “Cutthroat Croquet.”) Play usually takes about two hours.

To play the game, you will have to go to a sporting goods store and buy a croquet set. The set will consist of multicolored balls, long-handled mallets, about nine hoops (or wickets), and two wooden pegs.

The nine wire hoops are stuck into the ground in whatever pattern you choose, but the standard set-up is two diamond shapes—one on top of the other. Set your peg in the ground first with two hoops in front of it. Then a few feet ahead set two more hoops a few feet apart across from each other and another hoop aligned with the first two hoops you set in front of the peg. The shape should form a diamond. Repeat this pattern to create a second diamond on top of the first with the last point having two hoops and another peg behind the hoops.

The hoops should span over an area no more than 40 feet wide and 75 feet long. The wooden pegs mark the beginning and end of play. The balls must be struck through the hoops using the wooden mallets. The balls are also made of wood and are quite heavy. They are either solid in color or striped. You choose one ball and matching colored mallet and start the play at the wooden peg. You keep striking the ball through the hoops until you miss. Once you miss, you turn the play over to the next player. If someone's ball is in your way, you can knock it out with your own ball, but be careful not to knock your ball out in the process. 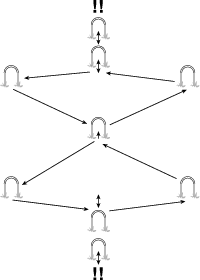 One point is scored for each hoop you hit your ball through as long as you make the hoops in the proper order. You also score a point when you hit a wooden peg.

The order of play is designated by the color of the balls.