You are 33 Weeks and 1 Day Pregnant 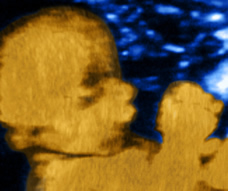 Your baby may well be head down by this stage. The head is the heaviest part and gravity plus the shape of your uterus favors a head-down position. Ask your doctor at the next visit if she can determine the position for you.

Premature labor is highly likely in a twin pregnancy, so your doctor will be on alert and monitoring you closely.

There's still six weeks to go until the due date for a single pregnancy, but if you're expecting twins they may arrive any time from now. Most singleton pregnancies are 38 to 42 weeks, but if you're carrying twins, 37 to 39 weeks is optimal. But more than half of twins are born before 37 weeks. Women expecting twins are at higher risk of high blood pressure, preeclampsia, placental insufficiency, gestational diabetes, and premature labor. That said, many women do go on to deliver twins naturally and many doctors will allow you to continue to 40 weeks, after which time an induction or cesarean might be suggested.

If the babies are in any position other than "head down," or the placenta is in an awkward position, such as near the neck of the uterus, a cesarean may be recommended. Some doctors prefer to deliver twins by cesarean because the second twin may run into difficulties during the delivery, particularly if she is not head down. Premature babies are more at risk of complications than those who go to full-term. A cesarean delivery ensures the babies are delivered quickly without having to go through hours of potentially stressful labor.

Sometimes, one twin is born vaginally and the other by cesarean. This often happens if the lower twin is in the "head down" position and the higher twin isn't. 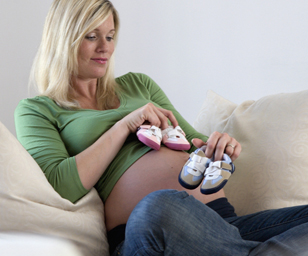 If you know your twin pregnancy is going to be induced or you've arranged a cesarean delivery, you have the advantage of being able to fully prepare for your babies' arrival.

This is compared to 7 lb 8 oz (3.5 kg) for singleton babies. It's not unusual for there to be a difference in birth weight between the babies. In fact, one twin may weight 2 to 3 lb more than the other.

I'm having my twins in a couple of weeks. Can they sleep in the same crib?

Having shared the same tight space in the uterus for many months, it seems natural to allow twin newborns to sleep together and, in fact, research indicates that it may have some benefits. Not only has it been found to be safe for twins of roughly the same size to sleep together until three months of age, but one study found that putting newborn twins in the same crib helped regulate their body temperature and their sleep cycles.

They can be placed side by side, or head to head. To be safe, don't overdress them or use blankets, bumpers, or pillows. Make sure the mattress is firm with a fitted sheet over it. Like singletons, twins should be put to sleep in the safe sleeping position, on their backs .

A double crib, which will last until your twins are old enough to move to a bed, but many experts believe twins should be given their own sleeping space from three months, so they can be given individual attention and the opportunity to develop their own sleep patterns.