FamilyEducation Staff
Check out these Fun, Stress-Free Fourth of July Crafts for the Whole Family.
Table of contents

Even though it may feel like summer just started, the Fourth of July is already right around the corner. Whether you're planning a cookout for the whole neighborhood or just a fun day in the yard with the kids, these three quick and easy Fourth of July crafts are sure to get you and your guests of all ages into the patriotic spirit.

This fun craft comes from Shaunna at Fantastic Fun and Learning and is sure to brighten up any Fourth of July party or barbecue. All you need is a glass jar, some white glue, a paintbrush, Fourth-themed sequins, and a battery-powered tea light. Any recycled glass jar will do — just scrub off the label before you get crafting. Next, use the paintbrush to cover the jar with glue. Shaunna recommends using some water to thin out the glue a bit first.

Then comes the fun part. Sprinkle your red, white, and blue sequins all over the jar. It's OK if they overlap — in fact, it looks really cool when they do. So don't be afraid to really go to town with the sequins. 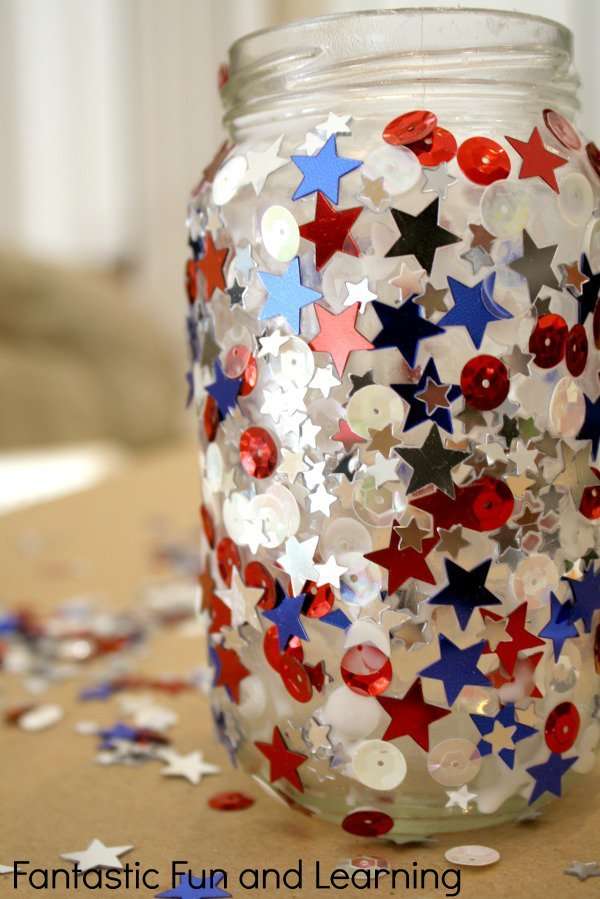 Cover the glass jar with glue and then sprinkle with sequins! Photo source: Shaunna Evans/Fantastic Fun and Learning

When you're satisfied with your level of sparkle, give it some time to dry. Then, as the sun starts to set on your Fourth of July cookout, pop a battery-operated tea light into your jar, and your party will have an instant patriotic glow. To find out more details about this craft and to see the finished project lit up in all its glory, check out Fantastic Fun and Learning.

You'll want to keep this creative American flag keychain on your keys well after the Fourth is over. Small hands may need your help with this one, but your elementary-school-aged kids should be able to get the hang of it. You'll need some string or cording (about 36 inches per keychain), red, white, and blue pony beads, scissors, and a keychain ring. You can use basically any kind of strong cording that you want, as long as it can fit through a pony bead twice. Nylon cording works nicely because it's much less likely to bunch up than elastic or stretchy cording. 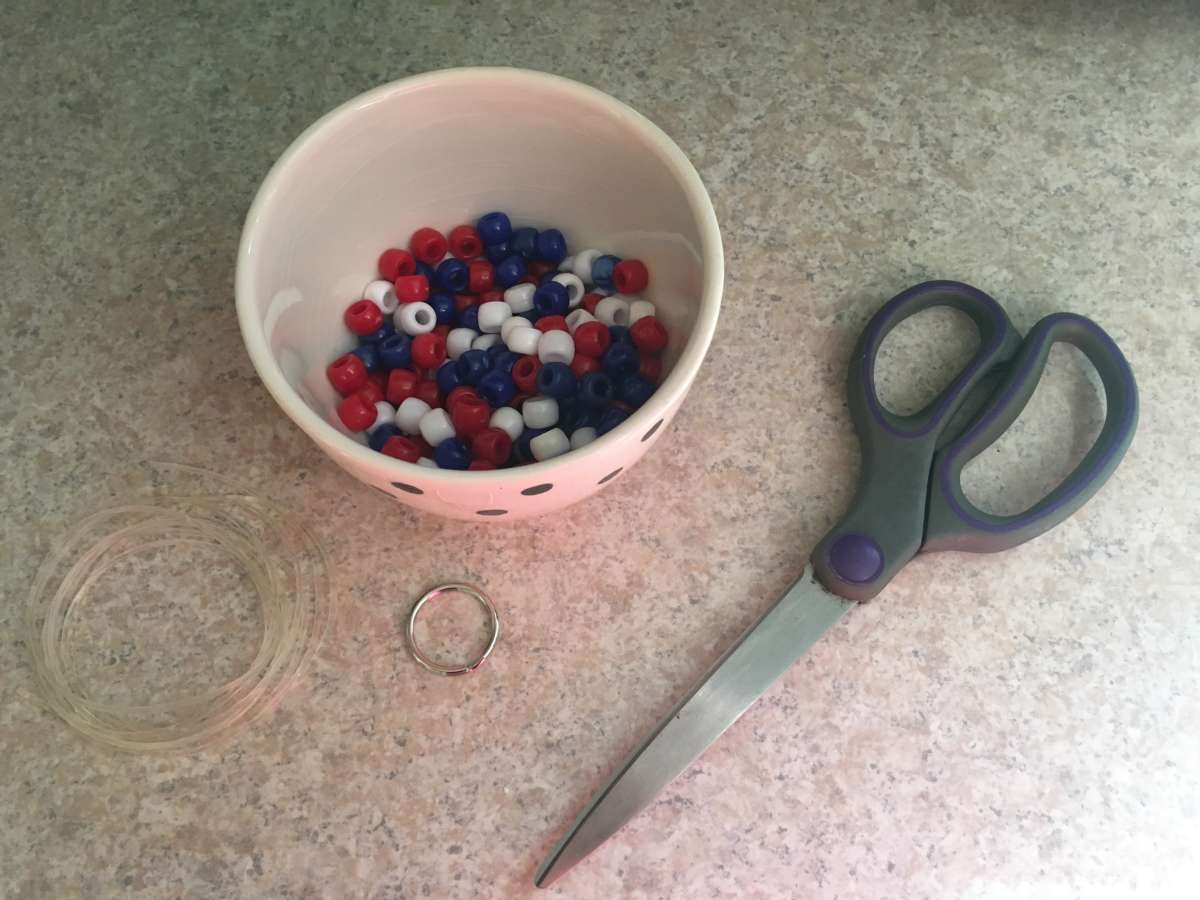 A key ring, beads, cording, a pair of scissors, and you're ready to go. Photo source: Colleen Hughes

Begin by folding the cording in half and tying it to the key ring with a lark's head knot. To make a lark's head knot, simply take your folded cording and place the loop at the top through the key ring. Then pull the two strands of the cord up through the loop and tighten. You should have two equally long strands of cord hanging from each side. (The key ring is held down with tape here so that the knot could be pulled tight for illustrative purposes.) 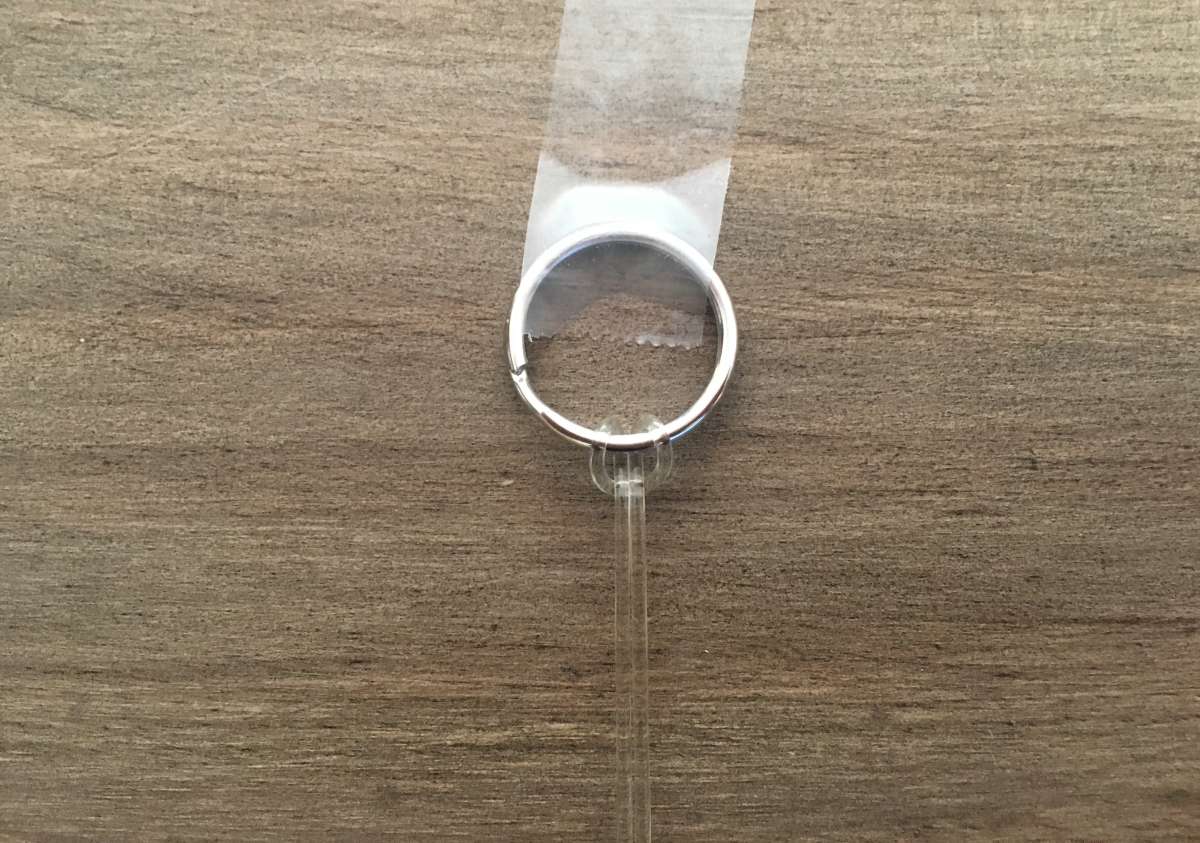 Take one of strands (strand 1) and string on three blue beads followed by a white, a red, a white, and a red bead. Then, thread the beads through the other strand (strand 2) beginning with the final red bead and ending with the blue beads. 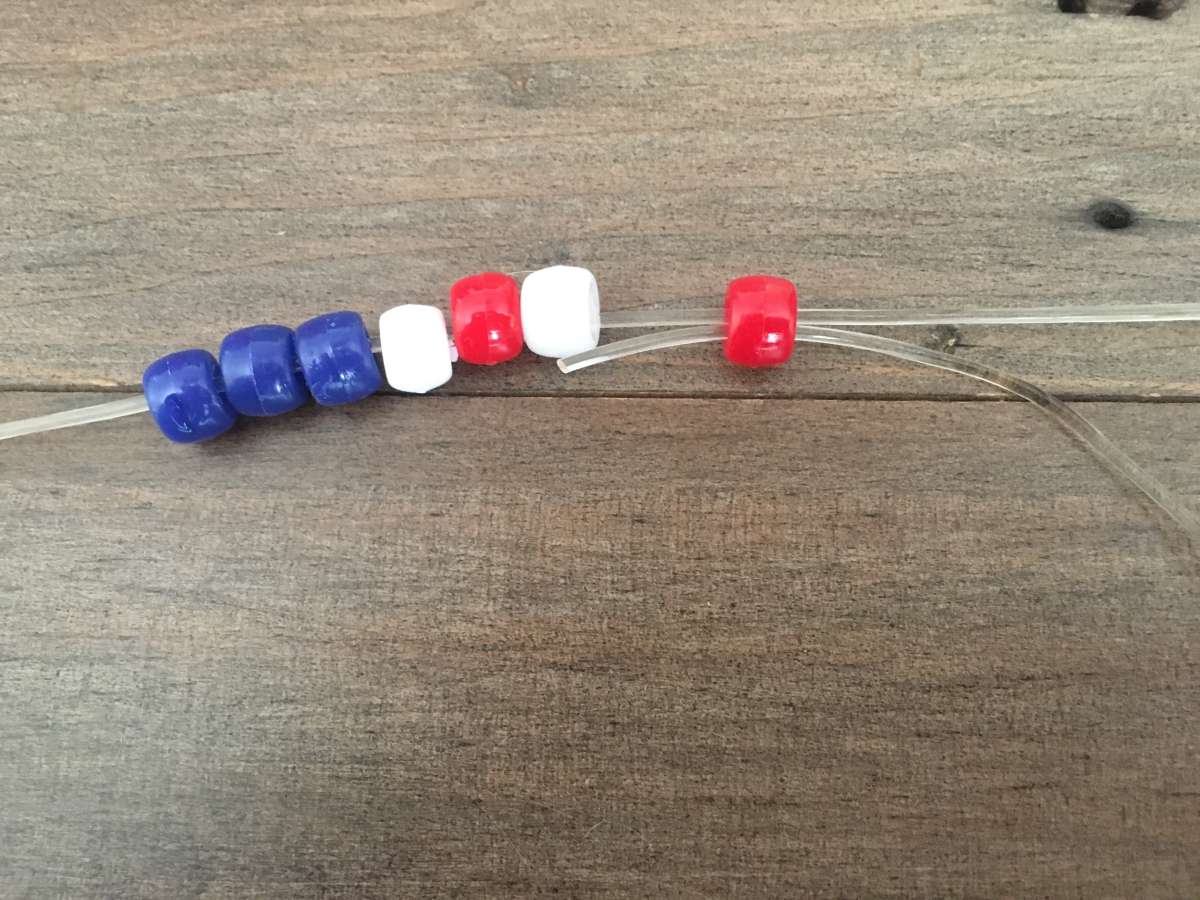 Thread strand two through the beads starting with the red and ending with the blue. Photo source: Colleen Hughes

Pull both ends of the cord to thread the beads all the way up to the key ring. This is the first column in your flag. 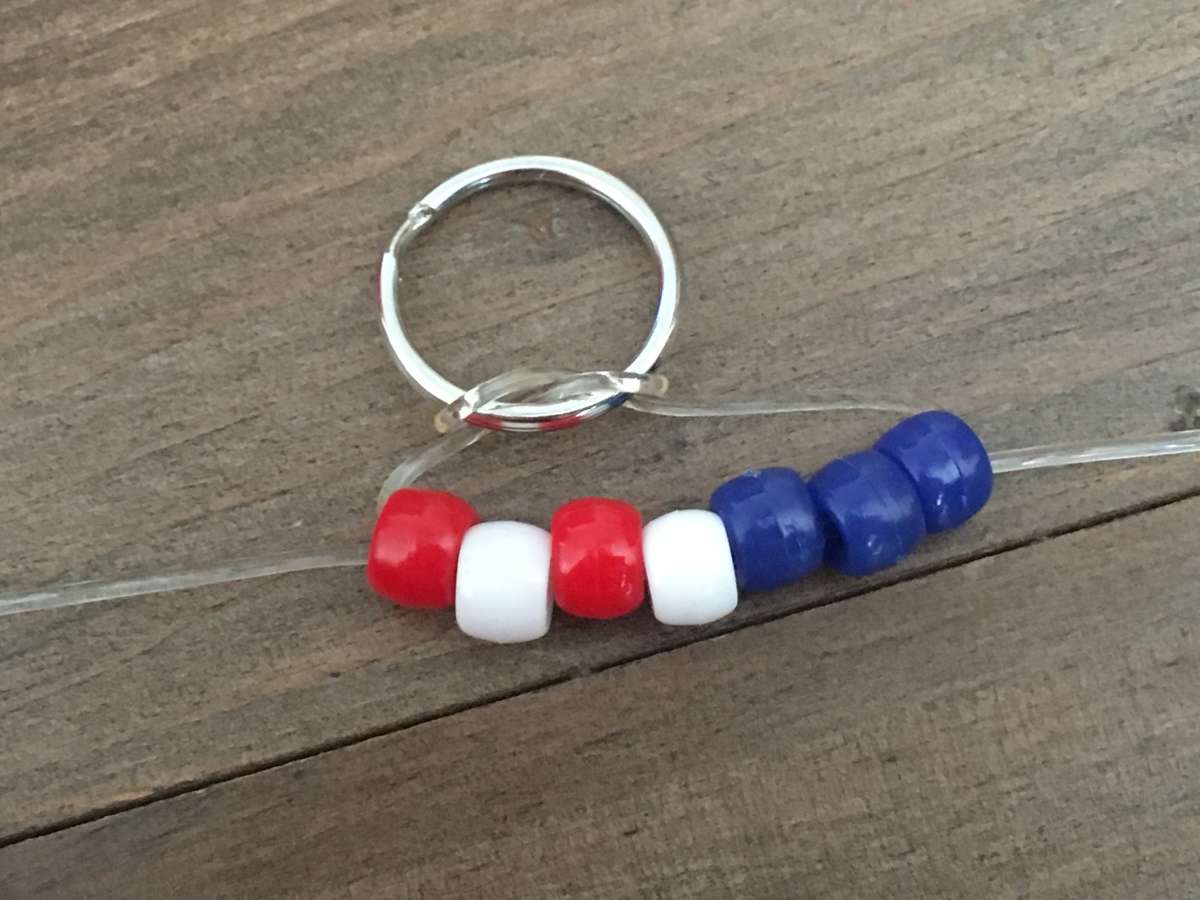 Pull both strands to line up the beads in a column. Photo source: Colleen Hughes 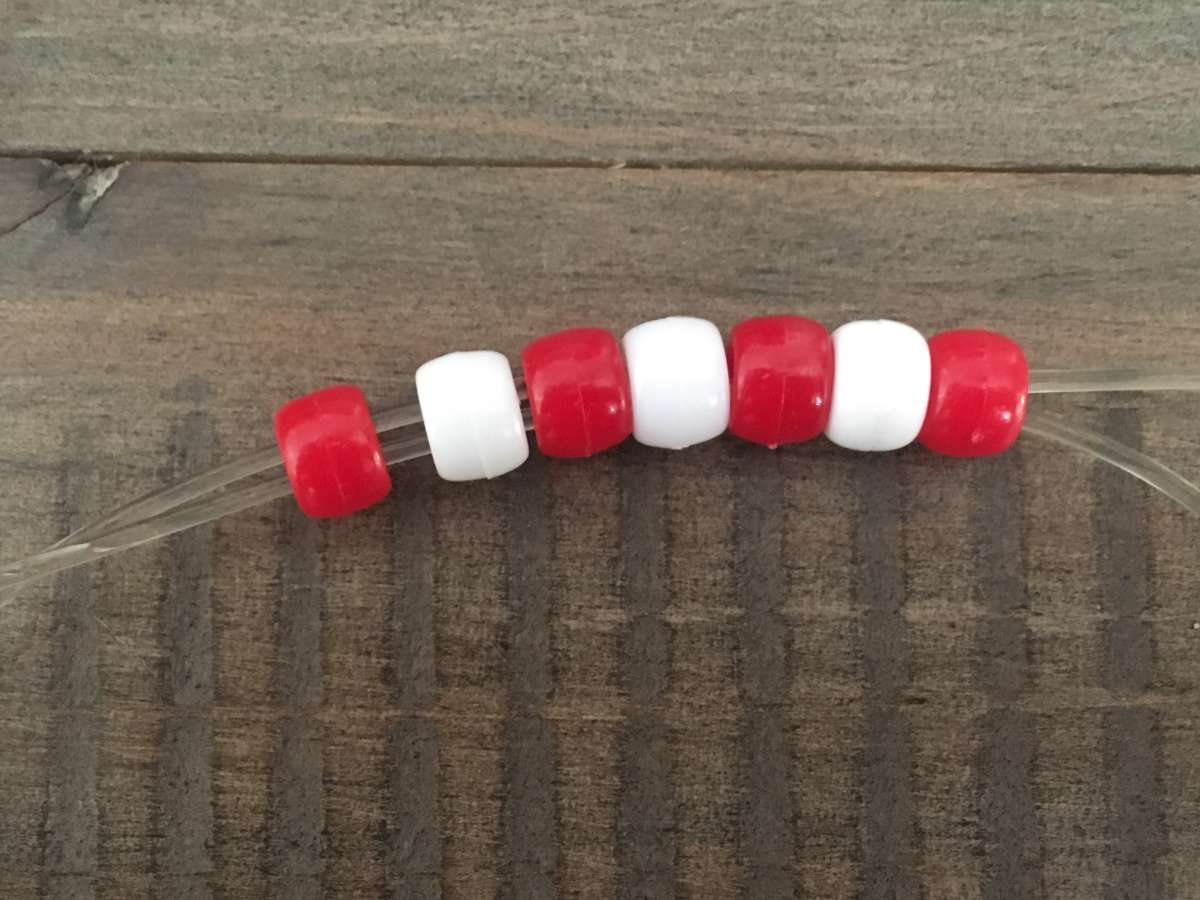 Pull it tight to create the first column of red and white stripes. 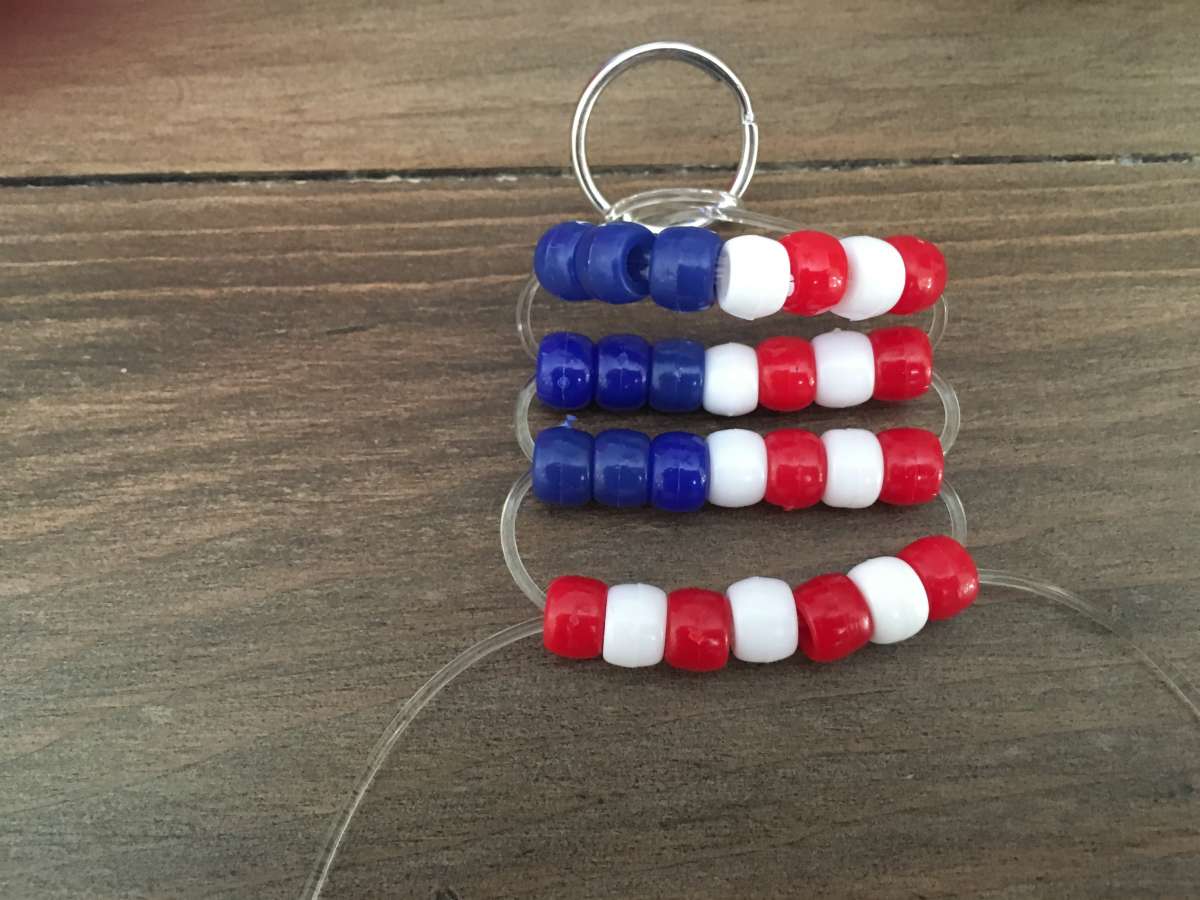 You should now have three columns making up the blue "stars" and your first complete column of "stripes." Photo source: Colleen Hughes

Repeat this process for columns five through seven. Your flag should now have seven rows and seven columns. After you have tightened the final row, double knot each end and cut off any excess cording. 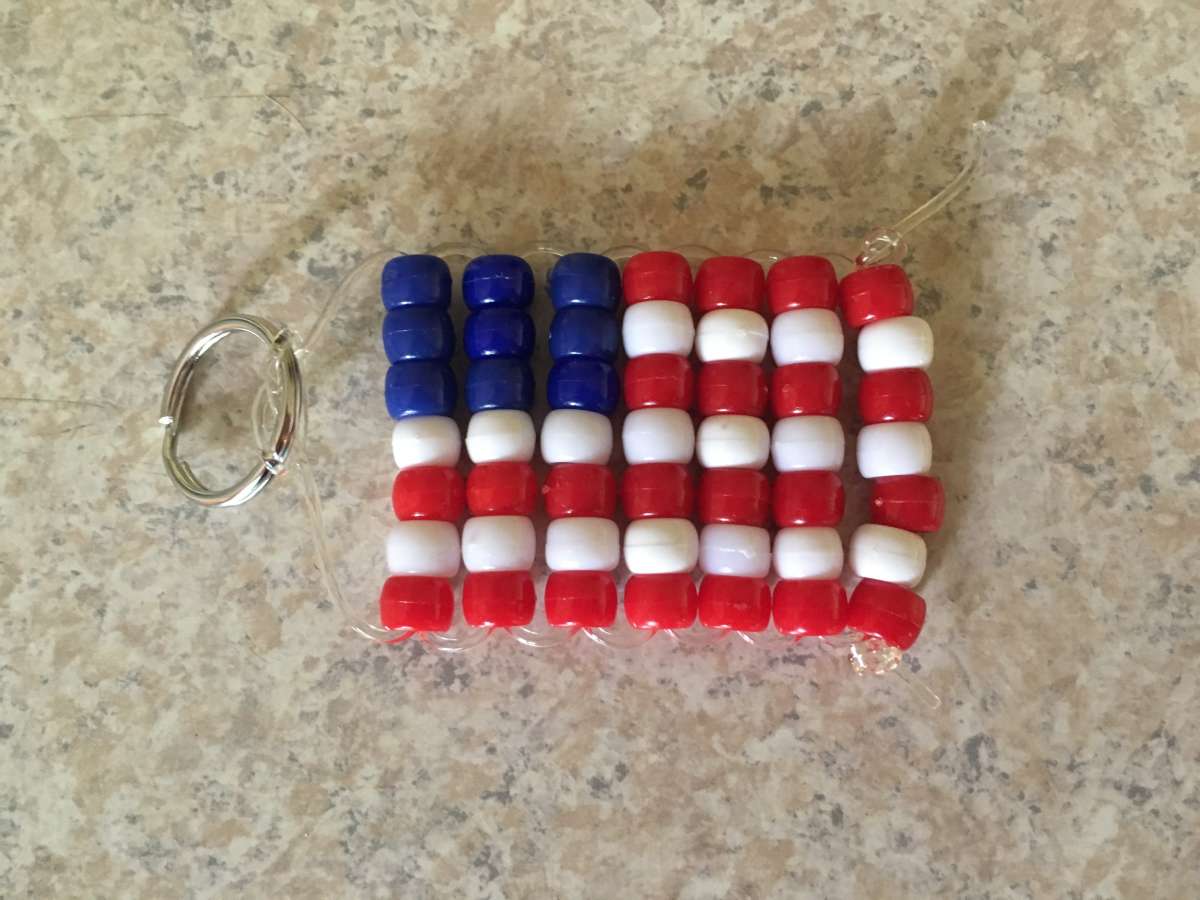 Attach to your keys, and show off your patriotic pride everywhere you go.

After the flag keychains, which can get a little tricky for younger kids, these Fourth of July crafts are super easy and sure to be a hit with the little ones. All you need are some toilet paper rolls, patriotic napkins (which, if you're planning a party, you may even already have on hand), ribbon, tape, scissors, and some candy or little toys to fill the poppers with. 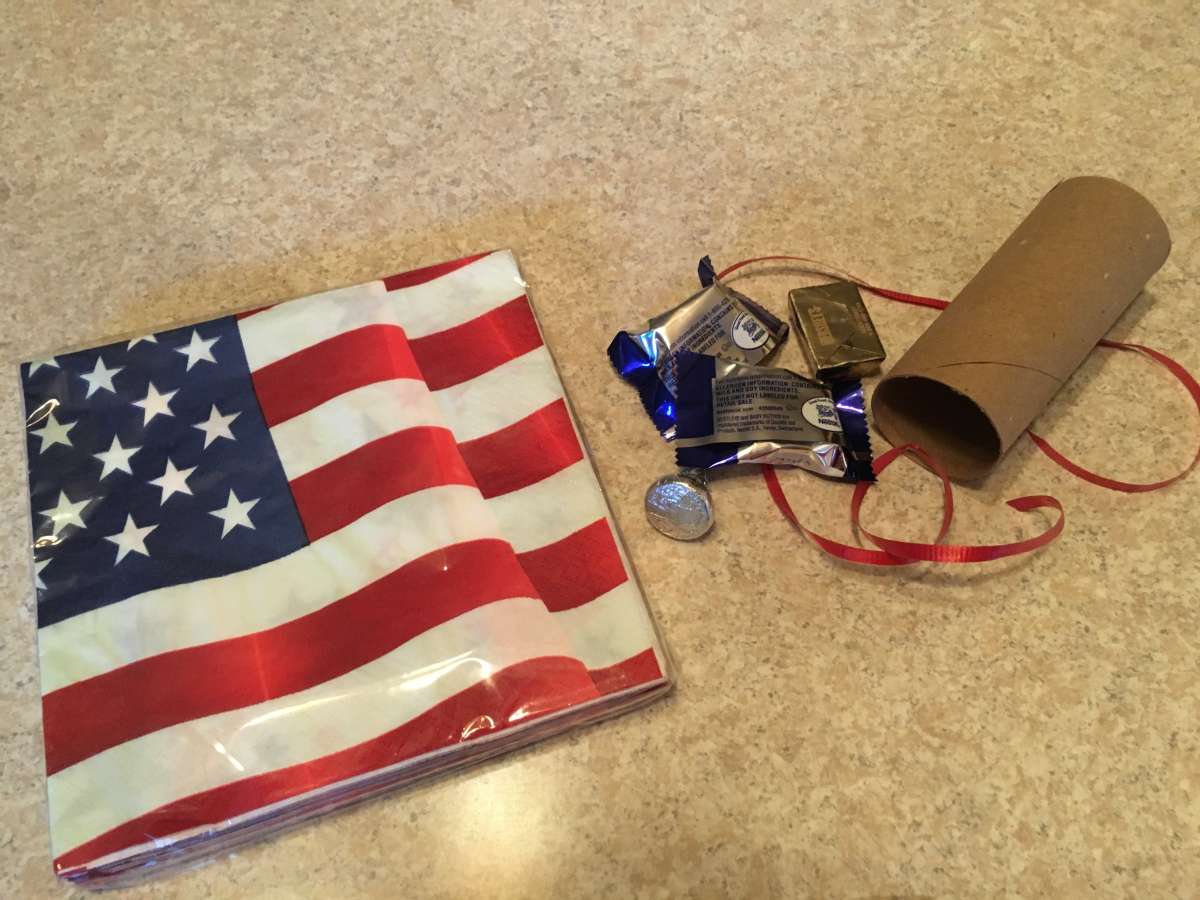 Toilet paper rolls, cute napkins, ribbon, and your filling of choice are all you need. Photo source: Colleen Hughes

Unfold the napkin and roll it around the toilet paper roll so that it's wrapped up in festive colors. Make sure that the napkin extends a few inches beyond the edge of the roll on each side and then secure to the roll with tape.

Twist up the napkin on one edge of the toilet paper roll and secure with ribbon, closing off one end of the popper. Then fill the other end with candy, glitter, sequins, or small toys. (Just be prepared for whatever you use as filling to go flying when the poppers are opened!) 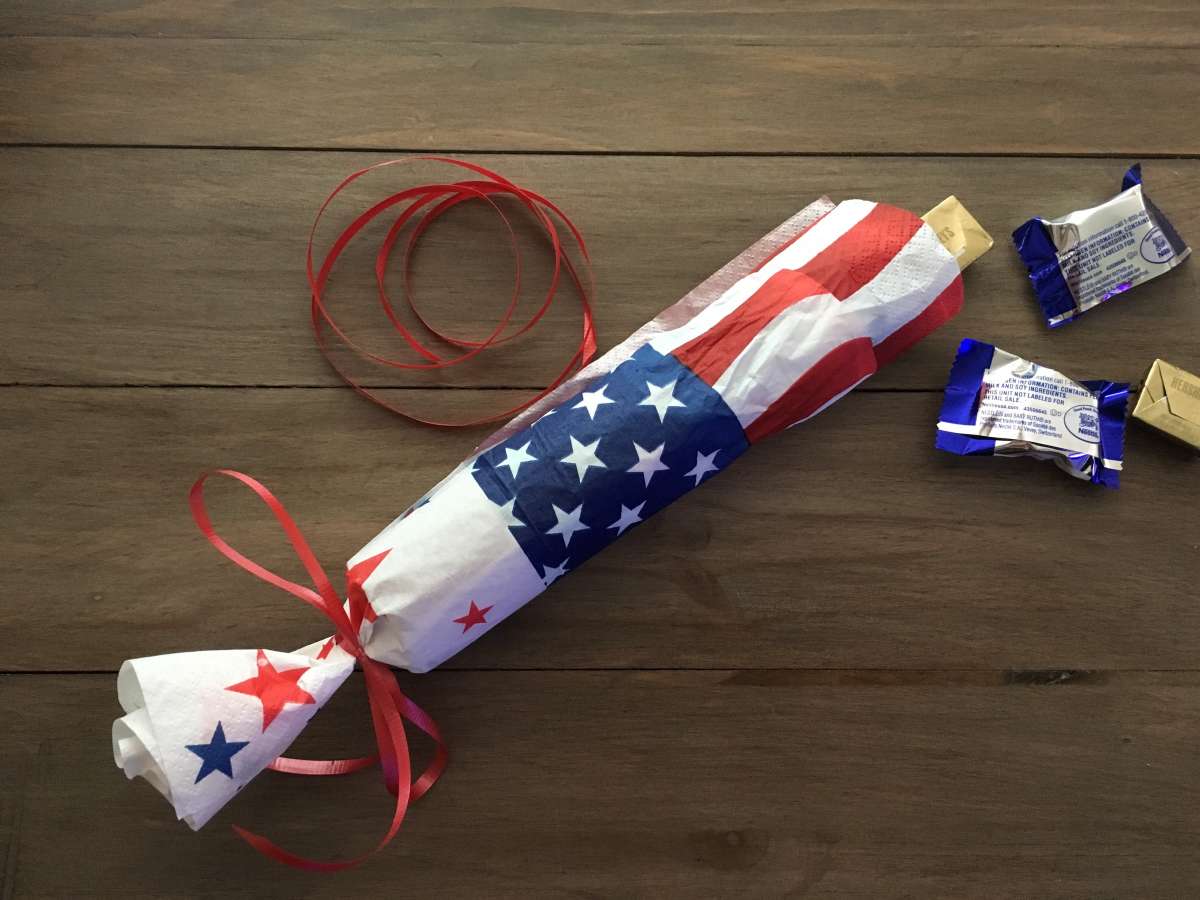 Tie off the first end and fill the popper up with treats. Photo source: Colleen Hughes

Finish the popper by twisting up the open end and securing it with ribbon. 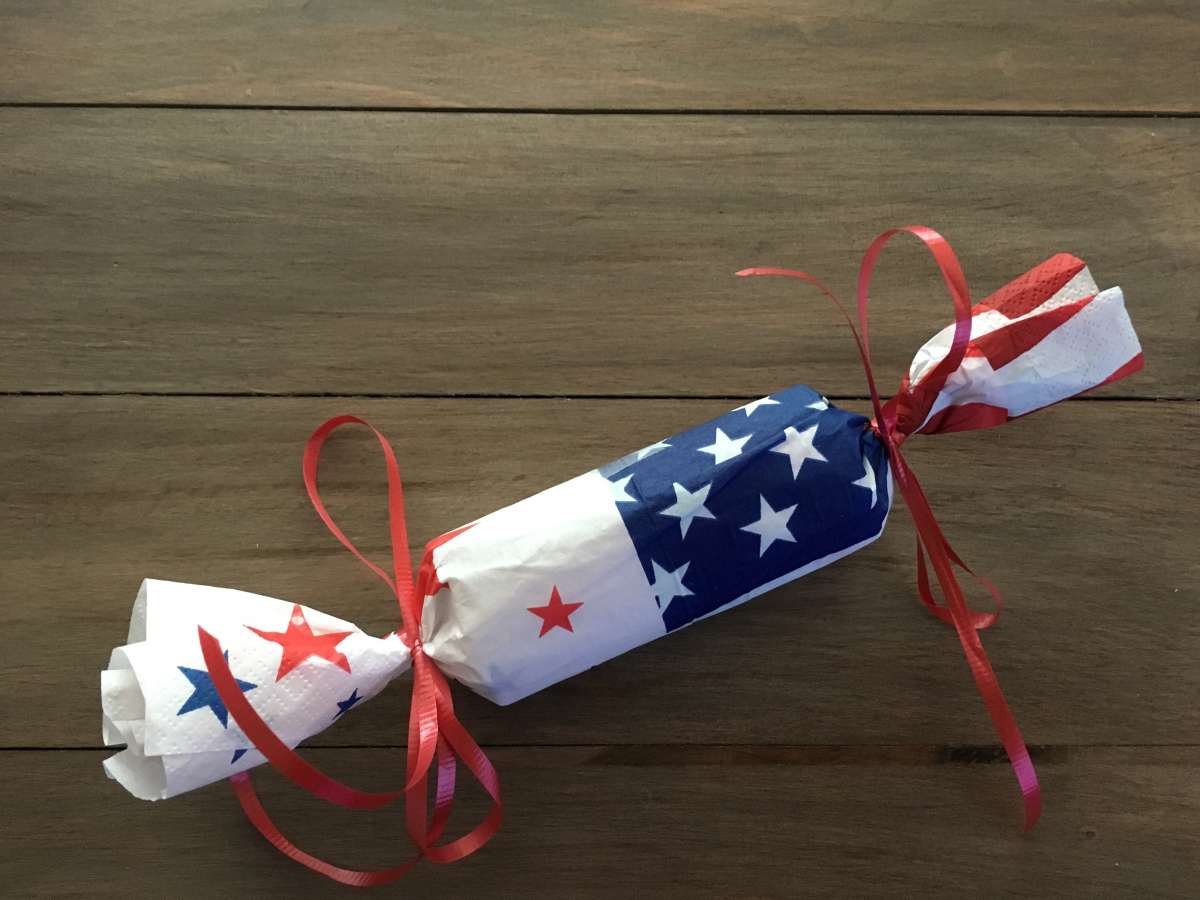