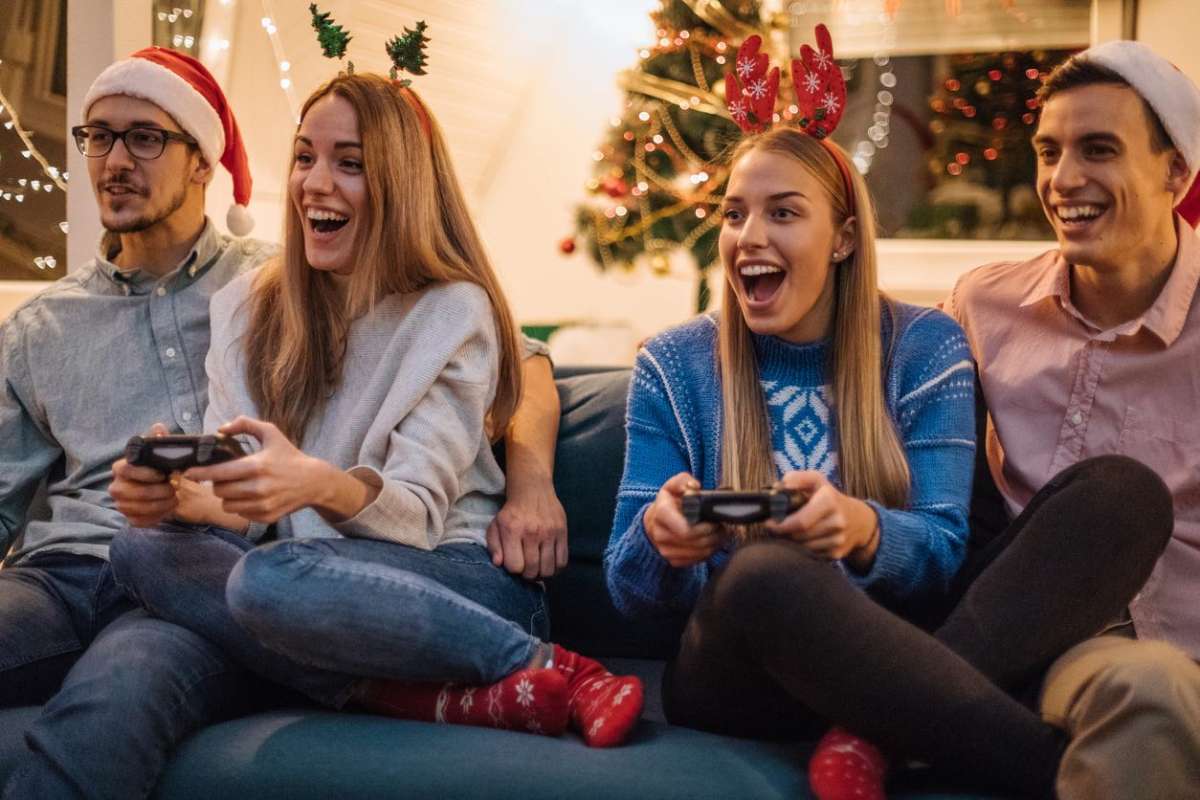 The best video games to get your kids this Christmas including new video games for 2022 and favorite games for kids and the whole family.
Brittany McCabe
Table of contents

As a family of gamers, this is a great time of year to find the best video games for ultimate Christmas magic. Even though video games count as screen time, it is the type of entertainment I can completely get behind.

There have been numerous studies showing the benefits of cognitive skills, memory, self-control, and other skills that are strengthened in kids who play video games. When it comes to weekend downtime, I would much rather they play video games, which actively involve their thinking, than passively watching shows. Videos games also provide a great bang for your buck, offering endless hours of entertainment and fun.

Related: The 20 Best Multiplayer Video Games for Kids in 2022

Where to Find a PS5 for Christmas?

Before we get into the best video game list for Christmas, let’s not forget about new video game consoles, PS5 and Xbox Series X. Luckily, the game is changing how to make purchases on hot commodities.

No more camping out in front of the store for hours and making a mad dash to your favorite department. Amazon released a waiting list for the PS5 and XboX Series X. You can follow this link to find all the information on the best places to find a Playstation 5 and Xbox Series X this Christmas.

They will be doing their best to screen out bots as well, to ensure real people, like you and me, are the console on their kid's Christmas wish list.

In addition, normally parents will wait for Black Friday deals on games, which typically starts on November 25th, but many of the major retailers have already started their video game sales! With sales starting early, it is best to get an early jump on Christmas shopping.

The Splatoon series is a third-person shooter video game with the main goal of shooting ink to cover your opponent. Splatoon 3 offers cool new weaponry as well as new morphing abilities. Get Splatoon 3

In the third installment of the Xenoblade Chronicles, the battles are bigger than ever! This action RPG and online multiplayer video take players to the world of Aionios, where 6 characters join together to fight hostile nations.  Get Xenoblade Chronicles 3.

This Christmas, give your kids a new Mario game just in time for the upcoming Mario movie!  In this RP single and multi-player game, you can build your own three-hero team to take down all new bosses and enemies. While braving your way through the galaxy, you will need to rescue sparks, who will provide powers to help you in your battle. Get Mario and Rabbid: Sparks of Hope now.

Immerse yourself in driving through Mexico’s scenic landscape, including intense tropical storms. Create your own unique car in the EventLab toolset. Get Forza Horizon 5 today.

The classic dancing video game Just Dance is back and better than ever! Just Dance 2023 takes it up a notch with online multiplayer, personalization, 3D immersive worlds, and new songs to move to. The whole family can burn off all those holiday cookies by dancing in the living room! Get Just Dance 2023.

Flip, sling, glide, and web-shoot your way through the city in this seamlessly acrobatic and visually pleasing game. This game also introduces new elements that have never been seen before in a Spider-Man game. Get the latest Spiderman video game from Marvel here.

Nothing gets kids excited for Christmas like a new Fortnite game. Fortnite Deep Freeze Bundle begins after a storm wiped out 98% of the earth and became inundated with monsters, your job is to explore the world, rescue survivors, make hundreds of weapons and forts, and take back the world from the monsters. Get the newest Fortnite game here.

Kids who love adventure games and cute animals will love this new video game. Tunic is a creative open-world RPG where you play as a tiny fox in a giant world. Uncover mysteries, and explore adventures, monsters, and ancient ruins. Get Tunic today.

Third-person adventure game where you play as a stray cat. Roam around in the ally ways and the murky environment as you see the world through the eyes of a playful cat. Complete challenges while being annoying, silly, stealthy, and nimble. Get Stray the game today.

There are even more new Pokemon games to play with your kids this Christmas! In this action-filled RPG, you can travel to the world of Hisui and build the first-ever Pokedex. You can study the behaviors of Pokemon while also sneaking up and catching them.  Get Pokemon Legends: Arceus now.

A first-person video game where you play as Beatrix LeBeau, a rancher, who sets off light years away from earth to stake her claim as a slime wrangler. You will spend your time making your world by growing crops and raising chickens, as well as collecting your hungry slimes. Get Slime Rancher 2 now.

Do your kids love the new Sonic movies? Get a new Sonic video game for Christmas! Have fun blazing through 5 massive islands, uncovering secrets, solving puzzles, and exploring adventures. Using all new skill tree upgrades and battle systems, you can combine moves such as counters, parries, combos, and an all-new loop ability to take down the enemy. Get Sonic Frontiers now.

Mario Kart is a game kids and parents both love! In the new Mario Kart 8, you can race through a total of 48 courses, including location-based scenes, such as the Paris promenade, as well as nostalgic classics. All the same great fun with the addition of easier-to-navigate usability.  Get Mario Kart 8 Deluxe.

Were your kids obsessed with Animal Crossing during the pandemic? It’s still a big favorite for kids and parents alike! Animal Crossing is an RP style where you can build your own community from scratch on a deserted island. Allowing your creativity and imagination to run rampant, you can customize your own characters, home, decorations, and landscape. You will need to collect materials, understand how seasons change and interact with island residents. Get Animal Crossing New Horizons.

Kids absolutely love Minecraft. This is a game about strategically placing blocks and going on adventures. There are multiple ways to play such as playing in survival mode and crafting weapons to fend off dangerous enemies.  Get Minecraft this Christmas if your kids haven’t already!

Are your kids already Minecraft obsessed? There’s a new version, Minecraft Dungeons that they’re sure to love. This action-adventure video game has you crawling through dungeons and castles on a quest. Unlike regular Minecraft, this is considered a role-player game where you will explore and navigate in a dungeon environment. Get Minecraft Dungeons now.

Rocket League is great for kids who love sports and video games. This arcade-style soccer game is played with cars as its soccer players. Includes an easy-to-navigate and learn the game, with over 1,000 customizable combinations.  Get Rocket League here.

20. Cuphead in the Delicious Last Course

In this adorable and quirky game Cuphead and Mugman help Chalice on a far-off island. This game offers all its signature old-school charm with the addition of brand-new bosses and levels to beat and you are introduced to a new character, chef Saltbaker. Get Cuphead in the Delicious Last Course.

21. Kirby and the Forgotten Land

Embark on a delightful adventure on a 3D platform. Explore abandoned structures and ancient ruins, while copying enemies’ abilities and using it against them to attack and explore. Make your way throughout the world eating real-life objects to use as weapons by spitting them back out. Get Kirby and the Forgotten Land.

Nintendo Switch Sports features 6 sports soccer, volleyball, tennis, bowling, badminton, and chambira, which is a type of swordplay. Great game to get everyone moving and with 6 different sports, it offers a lot of variety. Get Switch Sports now.

If your kids are big Marvel and MCU fans, this game is the perfect Christmas gift. Lego Marvel Super Heros is an original storyline that features the entire Marvel team including over 100 playable characters such as Black Widow, Loki, Spider-Man, Iron Man, Captain America, Hulk, and more. Fight your way throughout the Marvel universe and travel to iconic locations such as Stark-Tower, and X-Mansion. Get it now.

Have a pair of siblings who both want a video game for Christmas? It Takes Two is the perfect co-op game with beautiful colors, imaginative levels, and creative bosses that require absolute teamwork. This game’s storyline involves two parents who decide to get a divorce.

During their argument, they get transported to toy-like sizes and stuck in their daughter Rose’s bedroom. The challenges require them to work together to make it back to normal size and in the process learn to communicate effectively and decide to stay together after all. Get It Takes Two now.

For more Christmas gift ideas for kids this year check out 12 Days of Christmas Gift Ideas for the Whole Family.