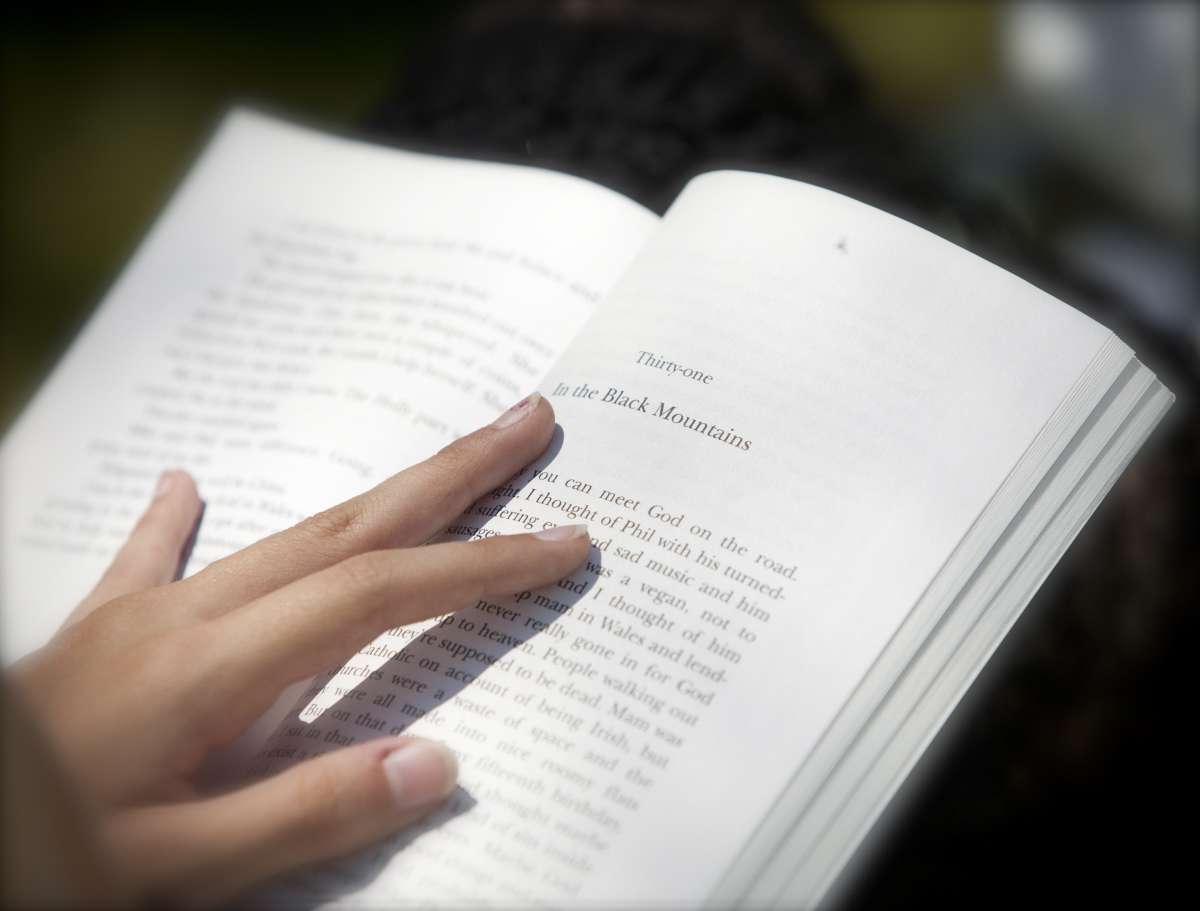 What Do You Do When Your Kid Wants to Read Terrible Books?

Everyone can agree that encouraging our kids to read is important. But what if they’re reading total garbage? Do you intervene or thank the stars that they’re picking up books instead of a video game remote? Jeff and Kim decide what makes a book terrible, and what to do when your kid likes that kind the best.
by: Kim Bongiorno and Jeff Vrabel

So What Is a Terrible Book, Really?

K: First things first. Let's define what a "terrible book" is. For me it could be bad quality, somehow negatively affects your kid, or just so dumb it hurts to run your eyeballs across the pages.

K: So what do you do when they’re reading them? Distract them with shiny objects? Grab the books from their hands and toss them directly in the fireplace? Be glad they’re reading at all while you die a little inside?

J: My oldest son used to read these terrible Geronimo Stilton books—you know, that journalistic mouse who accidentally ends up on all these wild adventures? They were all cheese puns (and you know how I like puns—I’m very gouda them) but it was just like, OK dude, you're a smart kid, you whip through books, and you're burning time on this silly mouse series with annoying characters and unpleasant typography. But, was he was reading? And not playing Minecraft? Yes and yes.

Have you ever dealt with this?

K: Yep. I encourage the reading always, but then my son would re-read things that were pointless and well below his reading ability, when there are stacks of great books all around him in every room of this house to read instead of that garbage.

K: What about the cooler classics, like The Outsiders?

J: True, but here's the thing: Aren’t great books boring as hell if you're 9 or 11 or 13? I mean, I can see their point. I could either read a Star Wars book with bounty hunters and light speed, or I could watch someone try to teach me a lesson. That choice pretty much makes itself.

J: When we take the 13-year-old to the library, he gravitates right toward the Calvin and Hobbes / comics section. I don't feel like saying, "BUT NO READ THIS CALDECOTT MEDAL WINNING TREATISE ABOUT THE RICH HUMAN EXPERIENCE WE ALL SHARE" will do anything but make it worse.

K: You are correct. I suggested an award-winning book to my son and he acted like I offered him a cup of vomit. Then two years later he found it on his own, so I pretended I knew nothing about its award-winningness because I refuse to taint it once again.

K: Neither does suggesting anything, ever, apparently.

J: Do yours read books over and over again?

K: My son does. Like certain books are palate cleansers after he reads things with emotion or life lessons in them. Anything with "fart" on the cover is usually gobbled right up. Repeatedly.

J: About once a month I kick myself for not having pitched a book series about a farting superhero 15 years ago, at the dawn of the farting superhero craze. Or, like, a crime fighter who is identified by his underpants. So many missed opportunities.

K: Onto the next icky bodily function!

But, are books about bodily functions really that bad?

J: I mean, there is a place for that stuff, clearly. And if some mom blogger rolled up with a piece about How My Kid Only Reads Newbery Medal Award Winning Classics I would want throw applesauce at her.

K: Those are usually read when a very tricky school librarian talks them into reading things she wants them to read.

K: Honestly, I think a mix is good. Let the grandparents and the librarians put award-winners in the kids' hands, let the kids pick out stuff with "fart" or "butt" or "poop" in the titles. Let us put books that fall between fart and award-winning in their hands. Then pray for the best.

J: I think that's a solid approach. Rely on the school and the library to handle some of the Wonder stuff. Put books in front of them when you can. Be perfectly OK with Star Wars novelizations. And when they're at school, remove all the fart/poop/butt books into a garbage fire.

And what about those wildly popular books with questionable topics?

K: What about books that just have terrible topics? Like, Hunger Games is about kids murdering each other, but "all the other kids are reading it." So do you let them, or not?

J: I was a little surprised to see that in the middle school classrooms, what with all the murder for sport and stuff. But then, how many classic books are about people going to war?

K: Approximately all of them.

J: And you have read The Outsiders, right?

K: You mean the fact that it’s full of gang violence, underage drinking, smoking, and crime, yet I’m suggesting our kids read it? Okay, so maybe I’m hypocritical on a book-by-book basis.

J: Would you have A Talk before your kids read those books? My oldest is sort of self-policing himself out of those. Little too bloody for his tastes currently.

K: My son usually hears about the gore ahead of time with books like that, because that’s the appeal: reading something that would probably horrify their parents. He'll usually ask me before picking a YA book up, since he knows I find these things out eventually, anyway.

So where do you draw the line?

J: This all said, I have drawn a line at Minecraft novels. Books about how to build more accomplished-looking castles and zeppelins, fine, sure, spend your allowance money. Novels about Minecraft people? No. Stop that immediately.

K: Oh, my son was soooooooo into those for a while. Go build things and make up your own stories, kid, WHICH IS THE SOLE POINT OF MINECRAFT.

J: I feel like I'm reasonably gracious about Minecraft time and interest. I like it just fine. He builds stuff. Building stuff is good! But it's like reading a novel about Pound Puppies, or Teddy Ruxpin: pointless.

K: I try to be open-minded, but at a certain point I drag everyone to the library or book store and use a combination of Jedi mind tricks and flat-out begging to get them to find something different. TRY SOMETHING NEW FOR THE LOVE OF ALL THAT IS DECENT.

J: Yeah, but that’s like anything else we do as parents with food, movies, music, whatever, you can't force anything on them, especially if it's Super Important and Will Teach Them the Importance of Sharing or Unity or Acceptance. Ugh. Boooorinnng.

K: Just before my son went to middle school, he was reading a TON of middle school themed books, and every single one of them focused on how shitty middle school is. Bullies and awkwardness and everyone's mean and the teachers are cruel and the homework will crush you so say goodbye to joy. I had to intervene, because he got scared that that was how it really would be for him. (I mean of course it kind of sucks, but it isn't QUITE that bad.) So I did put my foot down about reading terrible books about middle school until he was there for a while and could mentally balance it all out.

J: Middle school is pretty bad. I would have liked some of those books to give me more realistic expectations. Why didn't anyone write those books in 1987? Where was everyone? I'm very let down by this.

K: Well just know that future generations now have all the information they need.

J: If a kid's really into a movie book, I can be OK with that. I mean, I doubt he's gonna form any lasting emotional connection to the novelization of Jurassic World. Unless he does. We'll deal with that when it comes up.

K: Other than the great odds of being eaten, a job at a dinosaur zoo does seem pretty awesome. Does your older son ever want you to read to him anymore?

J: Oh yeah, but we don't do it all that often. We're crawling through Arthur Conan Doyle’s The Hound of the Baskervilles BUT that's only because we watched Sherlock, which was a violent and disturbing update of the classics. So, you know, I’m also a hypocrite.

J: Hey look! Parents are changing their tune based on a single personal experience, how crazy!

What about the occasional purge?

K: Do you ever, say, thin out the books your boys have in your house, so the cream rises to the top (and the terrible ones end up in the dumpster)?

"I quietly donate the ones I can get away with"

J: Well yes, inasmuch as I do that with everything in my house. I quietly donate things all the time. Yes, you are a purger.

J: One day someone's gonna be like "Where's Mr. Bunny?" and it will be ugly.

K: I quietly donate the ones I think I can get away with, and the others I can admit to saying, "If you donate your beloved Crappy McCrap book, I will buy you a new book the next time I go to the store." Because I'm not above bribery to get them to read fewer terrible books.

J: Now that’s solid parenting right there. Oh – and I totally pitched all these Geronimo Stilton books, of course.

K: I support that decision.

K: I guess every cloud DOES have a silver lining.

J: Whatever, I bet you make that cloud joke your Stratus update.

K: I have a thing at a place I need to get to now. [taps watch] So very late.