You are 26 Weeks and 2 Days Pregnant 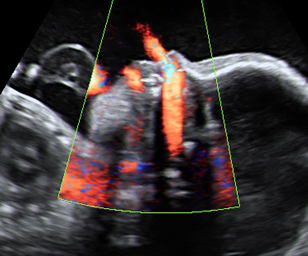 This color ultrasound shows the baby breathing the amniotic fluid (red, flowing toward the ultrasound beam) in and out. The baby is breathing a stream of fluid out through the nostrils and, at the same time, a smaller amount through the mouth.
As the development of your baby's eyes and sense of sight continues, he reaches another milestone: the eyelids open.

Although your baby's eyelids formed at nine weeks of pregnancy, they have remained fused together until this week. Your baby is not in complete darkness, however, because as the uterus grows its wall thins allowing in increasing amounts of light. Now, your baby's eyes have reached a stage of development where they can open.

Even with the eyelids open, the delicate structures of the eyeballs are protected by a fine membrane that will completely disappear during the final month of pregnancy.

It's too early for your baby to respond to light in a fully coordinated way, but he may turn toward very strong lights or, if startled by a sudden loud noise, he will often respond with a blink, just as children and adults do.

The retina has just started to be lined by light-receptive rods and cones. The cones are responsible for color vision and develop later than the more numerous rods. The rods transmit an image in black and white and are used for nighttime vision and for peripheral vision. Connections form between the retina and the optic nerve, that then transmits the information it receives to be decoded in the visual cortex at the back of the brain.

Your baby will often bring his hands up to his face. However, because his limb movements are now so well coordinated, he won't touch his eyes.

I've got inverted nipples. Will I be able to breast-feed?

Babies breast-feed rather than "nipple feed" and if your baby latches onto your breast correctly , inverted nipples shouldn't cause difficulties. About 10 percent of women have flat or inverted nipples. The best way to find out whether you can breast-feed is simply to try once your baby is born. There are various techniques that may help: consult your doctor if you're having problems or contact a lactation consultant. Your doctor or hospital may recommend one or the La Leche League can help .

Growth of twins in the last trimester

In these last three months, you're likely to get very big. As you'd expect, the more babies inside, the greater the challenge for your body to provide enough space as well as the perfect conditions for growth. You'll probably be advised to gain just under 1 lb (0.5 kg) a week for the first half of your pregnancy and slightly more each week in the second half.

From around 28-29 weeks, the growth of twins and other multiples slows down compared with that of singletons. But they still move and kick as much as possible, cushioned by amniotic fluid, which continues to increase in volume until 36 weeks.