You are 10 Weeks and 4 Days Pregnant 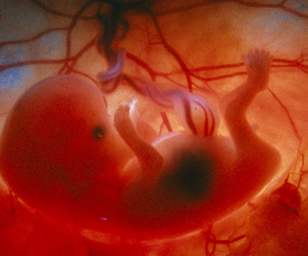 The umbilical cord gradually becomes more coiled as the pregnancy progresses-as seen here on the left of the image. This coiling is thought to occur because of the many movements the embryo makes.

Your baby's limbs are more developed now, enabling him to move, and his hands and fingers can be clearly seen on a scan.

Your baby takes on a more human form as his neck lengthens and his head is seen as separate from his body. The head is still about half the total length of your baby. The length of your baby can be measured on an ultrasound by measuring the distance between your baby's head (crown) and his bottom (rump). This is noted as the CRL (crown-rump length) measurement. The head is also measured: this is the biparietal diameter (BPD), which is the distance between the two parietal bones on each side of the baby's head.

Now that the neck is more developed and all the limb joints have formed, your baby can begin to make several movements. The completed diaphragm allows for breathing movements. In the gut, your baby's duodenum now opens up along its length, the small bowel starts to rotate and prepares to re-enter the abdominal cavity.

Within your baby's mouth, the hard palate has formed; the relatively large tongue makes it easier for your baby to move amniotic fluid through the nostrils rather than through his mouth with each breath. 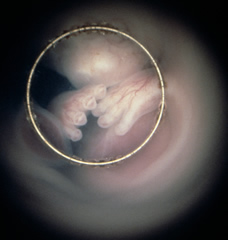 This endoscopic image, obtained by passing a fine light-emitting tube into the uterus, shows the hands obscuring the fetus's face.

At around 11 weeks of pregnancy, you may be offered a nuchal translucency screening. This test assesses the risk of Down syndrome by measuring the width of the fold of skin behind your baby's neck to see if any excess fluid has collected there.

Since your body is growing two or more babies, there will be physical effects. But there is a positive side: Since your growing size and hormones are the cause, these symptoms are often worse if the babies are doing well.

Mention severe symptoms if you're suffering, but remember these symptoms are not serious. You may be seen earlier if you suspect you're having twins, and will go on to have more prenatal appointments and ultrasound scans. You may be asked to limit activities like travel and exercise as your pregnancy progresses.