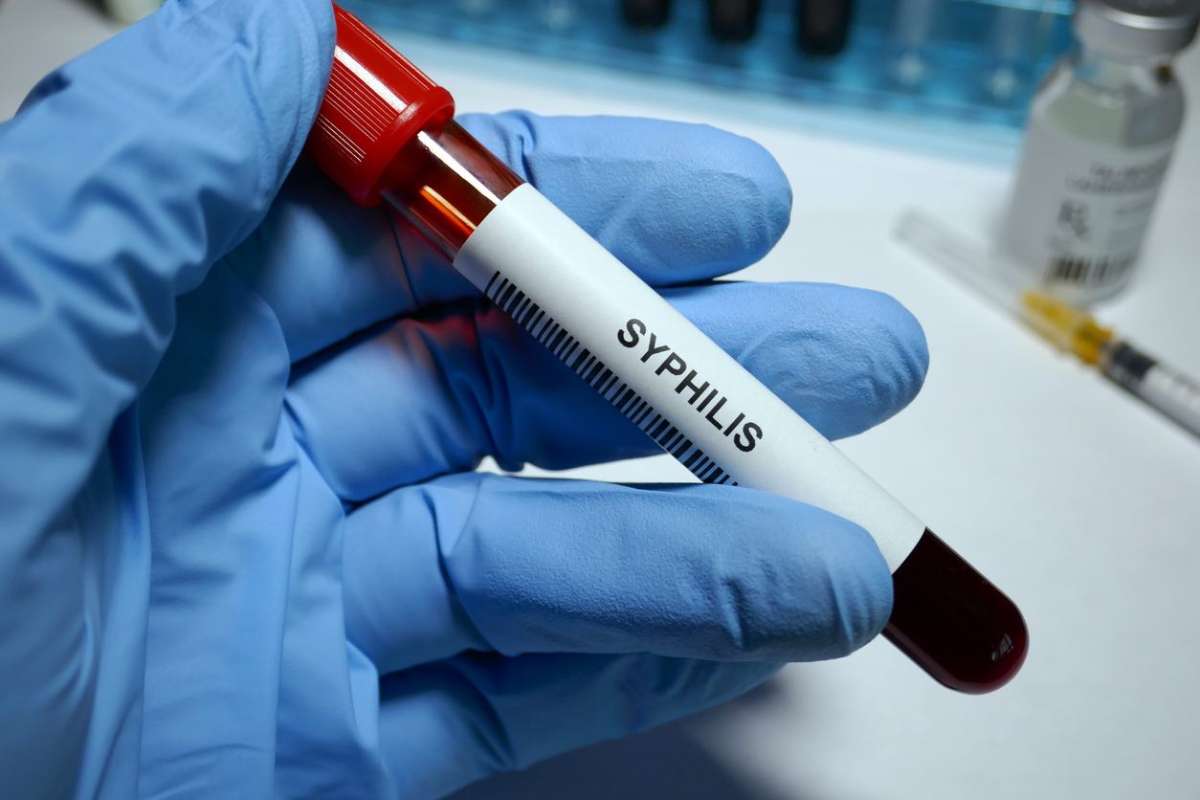 What Is Congenital Syphilis, and Why Is There a Surge?

What is congenital syphilis, why have the rates been rising over the last few years, and how can you protect yourself?
Erica Loop
Table of contents

After more than two years of pandemic COVID-19 surges, we’re all ready to put anything related to pathogens, teeny tiny microscopic particles, and potential illness-makers in the rearview mirror. But syphilis is making a comeback, and according to stats from the  U.S. Centers for Disease Control and Prevention (CDC), it is a public health problem.

While the exact origin of syphilis is still up for debate, the first records of the disease date back to the 1400s, according to the American Society for Microbiology (ASM). Caused by the microscopic spirochete treponema pallidum, syphilis is a sexually transmitted disease (or STD) that is spread through contact with infectious sores or mucous membranes. The most notable symptoms vary by stage and include a chancre sore and rashes that start on the trunk and spread just about everywhere else.

According to the Mayo Clinic, between 15 and 30 percent of people with tertiary or later-stage syphilis may have serious symptoms such as brain, eye, heart, blood vessels, nerve, liver, or bone, and joint damage.

The same bacteria causes both types of syphilis. But the method of infection and symptoms differ. Congenital syphilis is an acquired disease that pregnant women can pass onto their unborn babies. The mother-to-be may already have this STD when she gets pregnant or she can catch it during pregnancy. While either pre-pregnancy or pregnancy-acquired syphilis could result in fetal infection, it’s more likely to happen if the mother catches the disease after she is already pregnant.

If left untreated, syphilis in pregnant people can lead to stillbirth. According to the CDC, stillbirth and infant death affects nearly 40 percent of babies carried by or born to mothers with syphilis that isn’t treated before or during pregnancy.

What are the Symptoms of Congenital Syphilis?

Obviously, there are no symptoms of this disease in-utero. This means some pregnant women may not know their unborn babies have congenital syphilis — especially if syphilis testing isn’t part of the mother-to-be’s prenatal care. If the woman suspects she has this STI or has a confirmed positive test in the past (and an untreated infection), healthcare providers can take steps to evaluate the unborn baby’s syphilis status. But a definitive diagnosis isn’t always easy. The maternal-fetal blood supply makes it tricky to tell whether just the mother has the STD or both the mother and the baby are positive.

The National Organization for Rare Disorders (NORD) notes that some symptoms of congenital syphilis may start as early as three weeks after birth — or as late as five years. The early symptoms could include abnormalities such as low birth weight, high birth-time cholesterol levels, rashes, fever, anemia, enlarged liver or spleen, jaundice, inflammation around the bones, infectious nasal discharge, inflammation of the iris of the eye, pneumonia, skin shedding on the palms and soles, or a hard umbilical cord.

Can Congenital Syphilis Be Cured?

According to CDC.gov, yes. There is treatment for congenital syphilis. Babies with CS need to be treated right away — or they can develop serious health problems. Depending on the results of your baby’s medical evaluation, they may need antibiotics in a hospital for up to 10 days. In some cases, only one injection of antibiotic is needed. It’s important that babies treated for CS get follow-up care to make sure that the treatment worked.

If you are an adult with syphilis, you can also be treated and cured with antibiotics. If you test positive for syphilis during pregnancy, be sure to get treatment right away. Doctors detect and diagnose syphilis through blood tests, and syphilis screening is carried out regularly in many areas. If you are diagnosed with and treated for syphilis, your doctor should do follow-up testing for at least one year to make sure that your treatment is working.

How Common is Syphilis Right Now?

The greater the number of pregnant people with untreated syphilis, the higher the public health risk. In recent years, the number of pregnant people with syphilis and babies with congenital syphilis has significantly increased. The CDC reports that in 2010 there were 387 cases in the U.S. This number dipped to 358 in 2011, and again to 334 in 2012. This is where the curve stopped flattening.

Why Are Syphilis Rates Increasing?

What’s behind the congenital syphilis surge? There isn’t one all-encompassing reason for the increase in cases. A report from the CDC showed that during the beginning stages of the pandemic, the rates of syphilis (both primary and secondary syphilis), congenital syphilis, and gonorrhea all increased. But this doesn’t mean all STD infections rose during the COVID-19 lockdown. The CDC’s stats also show that during this time period, the rates of chlamydia declined. So, what’s behind the increase in some types of public health STI threats?

The recent focus on COVID-19, mitigation measures, and quarantines disrupted many aspects of the health care and public health systems all over the world. Women who may have otherwise seen a doctor (for prenatal care or routine care) or chosen STI testing may have put these preventative health care measures on hold out of fear of attending hospitals or due to a lack of available services.

Without infectious disease testing, it’s impossible to know whether a person has an STI or not. This lack of knowledge can result in an uptick in sexually transmitted diseases. Along with a recent dip in the availability of health care services, STD prevention efforts from local health departments were partially or possibly even fully put on hold. Without the ability to safely access the public, local health departments couldn’t get the message out effectively. Combine this with the added burden of COVID-19, and you can start to see how and why the STI rates climbed during this period.

Even though limited access to health care services contributed to the rise in cases of congenital syphilis, it wasn’t the only cause. Risky behaviors also play a primary role in the congenital syphilis surge. If you’re pregnant or planning a pregnancy and think that you’re a high-risk mother-to-be, talk to your healthcare provider about sexually transmitted infections and syphilis testing. The sooner you get tested, the better for you and your baby. Start at your first prenatal visit and ask your medical provider for a fact sheet on the disease or more info on ways to prevent or test for it.

While syphilis can cause stillbirth, infant deaths, and healthcare issues for both the mother and her baby, there are treatments. Penicillin is a common and effective treatment for cases of confirmed or probable congenital syphilis.

Do you want to learn about sexually transmitted infections? Check out the A,B,C’s of STDs for more info!