Total Solar Eclipse 2017: What to Know and How to View it Safely

A Total Solar Eclipse will happen on August 21, 2017. This fascinating phenomenon will darken the skies on a contiguous path from Oregon to South Carolina. If you're planning on viewing this rare sight, you'll want to take the proper safety measures for you and your family. Read on to find out more.

You've probably heard that a total solar eclipse is happening on August 21, 2017. But what exactly is a total eclipse, and what makes this one so special? Here's everything you need to know about the upcoming eclipse — what it is, how to view, and how to be safe while you're enjoying nature's show.

What Is an Eclipse?

An eclipse happens when the sun, moon, and Earth are aligned in a specific way that causes either the moon or the sun to be partially or fully hidden from view. A lunar eclipse occurs when the sun, moon, and Earth are aligned with the Earth in the middle. The moon passes into the Earth's shadow and turns a dark reddish color (you may remember the "blood moon" from a few years ago). A solar eclipse happens when the three bodies align but the moon is in the middle and obstructs view of the sun. While a lunar eclipse can be viewed by anyone on Earth experiencing nighttime at its occurrence, a solar eclipse can only be viewed by a small percentage of the planet. Totality of solar eclipses also last for much less time — minutes as opposed to hours.

There are four different types of solar eclipses: total (which lucky folks along the path of totality will experience), partial (which the rest of the country will see), annular, and hybrid. In a total eclipse, the moon completely covers the sun, and you can only see the sun's corona (its outer atmosphere) in a bright ring. 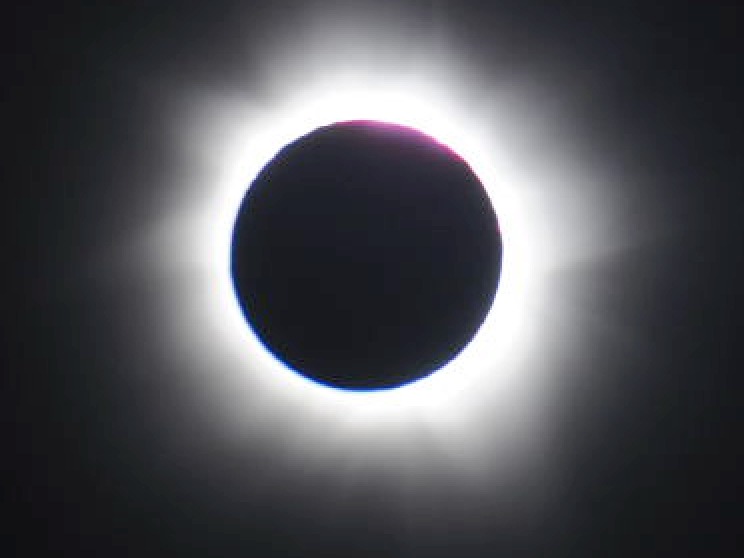 During a total eclipse, only the sun's corona is visible at the moment of totality. Photo Source: Flickr/NASA Goddard Space Flight Center

In a partial eclipse, only part of the sun is obscured. 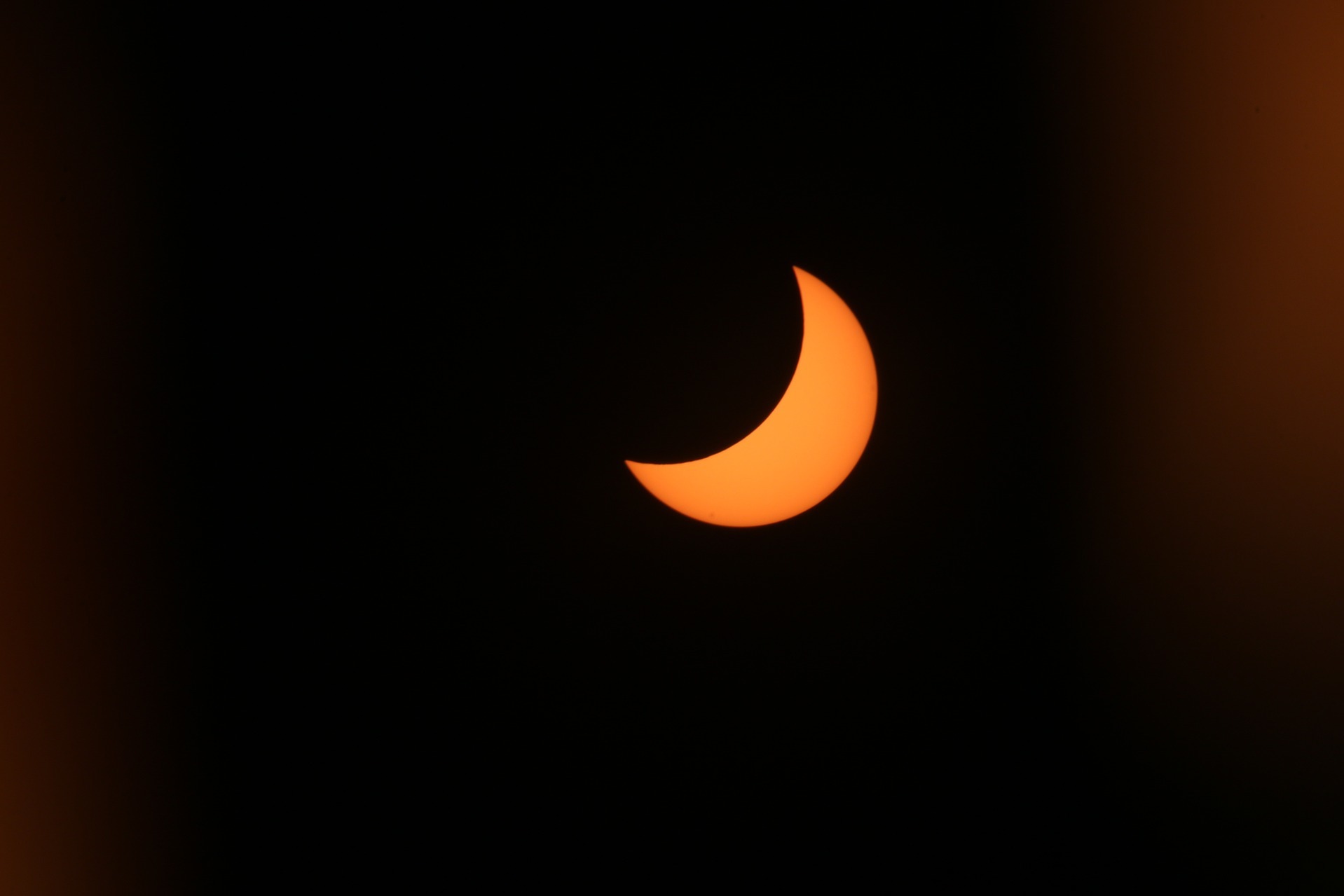 Most of us will see a partial eclipse on the 21st. Photo Source: Pixaby/markito

An annular eclipse completely covers the sun like a total eclipse, but the moon's position makes it too small to fully cover the sun, so you see a reddish-orange ring around the shadow. 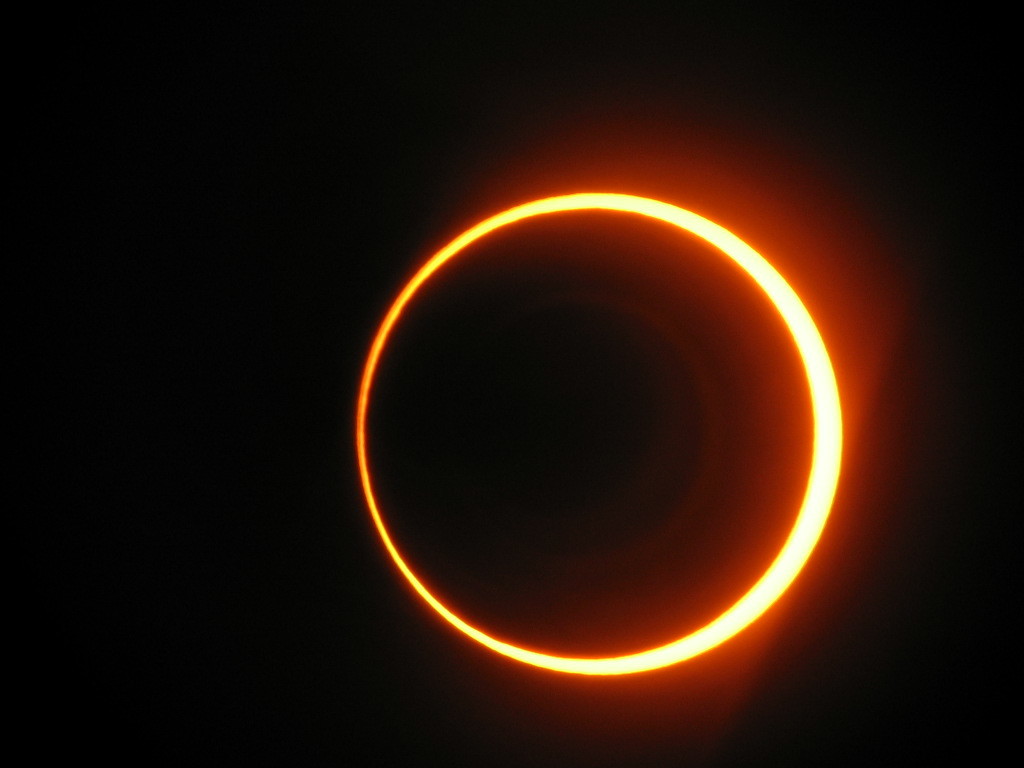 In an annular eclipse, the moon's shadow is too small to fully cover the sun. Photo Source: Flickr/Abel Pardo López

A hybrid eclipse is a combination of annular and total — it starts as one type and ends as the other.

How Often Do They Happen?

Between two and five solar eclipses happen every year, though having five in one year is very rare (the last time was in 1935, and the next time isn't scheduled to be until 2206!), and a total eclipse happens roughly every 18 months. However, each solar eclipse is only visible along a relatively small path across the Earth, so experiencing one near you is pretty rare, and total solar eclipses only recur in the same place about every 360 to 410 years. The total eclipse on August 21 is so special because, for the first time in 38 years, the entire United States will be able to see at least a partial eclipse. In fact, all of North America, plus parts of South America, Africa, and Europe, will be able to see this eclipse.

Where Can You View the Eclipse?

First, you want to know if you're one of the lucky ones living along the path of totality, where you can see the full total eclipse. The path of totality begins in Lincoln Beach, Oregon, and stretches across parts of Oregon, Idaho, Wyoming, Montana, Nebraska, Iowa, Kansas, Missouri, Illinois, Kentucky, Tennessee, Georgia, North Carolina, and South Carolina, where it ends in Charleston. 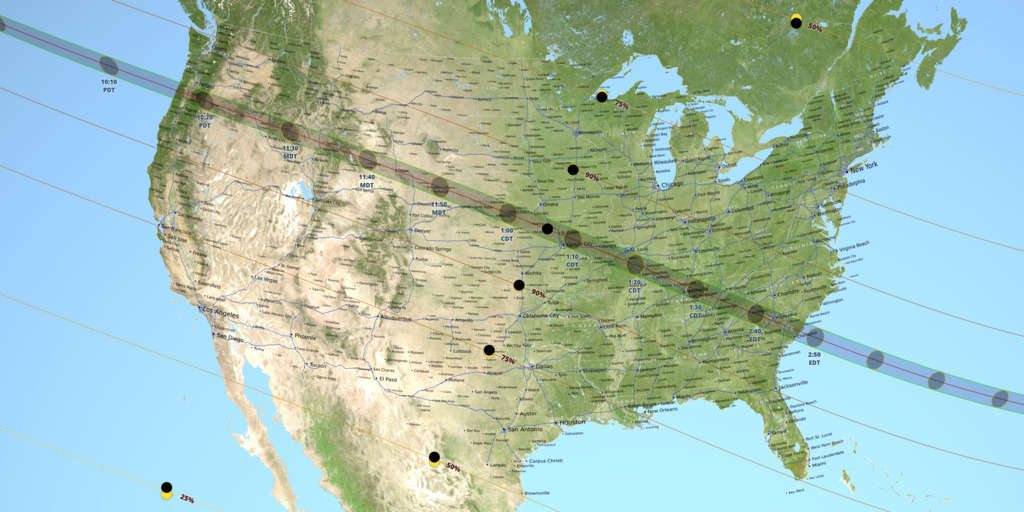 The path of totality passes through the entire continental US, from Oregon to South Carolina. Photo Source:NASA

The timing of the eclipse will vary immensely depending on where you live. If you live near Lincoln Beach, OR, the eclipse starts at 9:05 a.m. Pacific time and reaches totality at 10:16 a.m., but in Charleston, totality will occur at 2:48 p.m. Eastern time. How much of an eclipse you will see also depends on how far away you live from the path of totality. If you're relatively close to that band on the map, you'll see more of a complete eclipse. Check out this animation from NASA for a view of how the eclipse will look in different places across the country.

NASA's eclipse website is also full of resources for finding the time of day to view the eclipse in your area as well as how much of the eclipse you will be able to see.

It's important to never look directly into the sun because its rays can damage your retina. While it is possible to view the point of full totality without special glasses, this is a brief moment of the event that only people in the path of totality will experience. Everyone planning to view the eclipse should have a set of solar filter glasses or handheld filters. Do not use regular sunglasses or attempt to make your own. Here is a list of reputable manufacturers and dealers from the American Astronomical Society. It's also very important not to look through a camera, binoculars, a telescope, or any other optical device without a solar filter — the sun's rays can still harm you through the lenses. Make sure your children are correctly wearing their solar filters and that they look away from the sun before removing them. By following these important tips, you and your family can safely enjoy one of nature's most spectacular shows.