Conversation Starter: Who Are the Maasai?

FamilyEducation Staff
Learn more about the history of the Maasai people, and find out why cows are their most prized possession.

Although we might not think too much of passing a herd of grazing cows, did you know that in other parts of the world, cows are extremely important animals? Over in India, cows are treated as sacred beings, while for the Maasai people of Kenya and Tanzania, they are their most prized possessions and a lifeline!

There are around one million Maasai people who have a long warrior history. They live in temporary villages and follow their cattle from place to place across the desert. Though the animals tend not to be eaten, they provide valuable milk when there is little else to be found and are used to trade, instead of money!

Maasai men have long braids and wear a red cloth called a shuka. They’re in charge of the villages and cattle, and when boys turn four, they begin to look after the baby animals. Maasai women have shaved heads, wear colorful robes with lots of handmade, beaded jewelry, and girls help their mums look after the home - though nowadays some Maasai kids also go to school. Some see the Maasai’s way of life as too old-fashioned for the modern world, but Oxfam has said that with climate change, Africa could learn much from the Maasai people because they are experts at surviving in harsh environments. 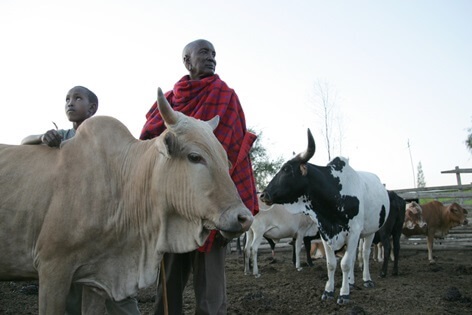 Cattle are so important to the Maasai that it’s said they can even tell their animals apart just from hearing the sound of their voices! And it’s not just during their lifetimes that the Maasai people prize their animals.

The Maasai are also a spiritual people who believe they each have a guardian angel whose job it is to look out for them during their lives. But when they die, they believe their angel will either whisk them off to a lovely place with lots of grass, trees and cattle, or else, a harsh desert with no water or animals – all depending on whether they’ve been good or bad!

In times past, Maasai children had to get creative with their play. One popular game had kids placing stones on the back of a sleeping rhinoceros – the winner being the last person to get their stone onto the rhino before it woke up! Scary stuff!