Extreme Fitness During Pregnancy: Do I Have to Ditch My Routine?

Rachel Sokol
Is extreme fitness safe during pregnancy? Does being pregnant mean you have to ditch your routine? These three women didn't!
Table of contents

We all know that one mom who hit the gym every day her entire pregnancy.

(In my case, I was certainly NOT that mom, and envious of women who maintained their workout schedule their whole pregnancy!)

We know that regular exercise is good for moms-to-be, but what about extreme fitness? There are plenty of women these days who are into Boot Camp, Spartan races and hot yoga. When they get pregnant, do they have to call it quits?

“The ACOG [American College of Obstetrics and Gynecologists] recommends and encourages exercise during pregnancy,” says Sylvania, Ohio-based OB-GYN Brittany Denny, DO. “A woman should ask to her doctor to be sure she does not have any contraindications to exercise in pregnancy.”

In general, says Denny, a woman is encouraged to continue whatever level of exercise she maintained before pregnancy. “Exceptions include participating in activities like ‘hot yoga,’ contact sports and sky diving. Maintaining physical activity in pregnancy has been shown to decrease the risk of cesarean section, gestational diabetes and pre-eclampsia.” 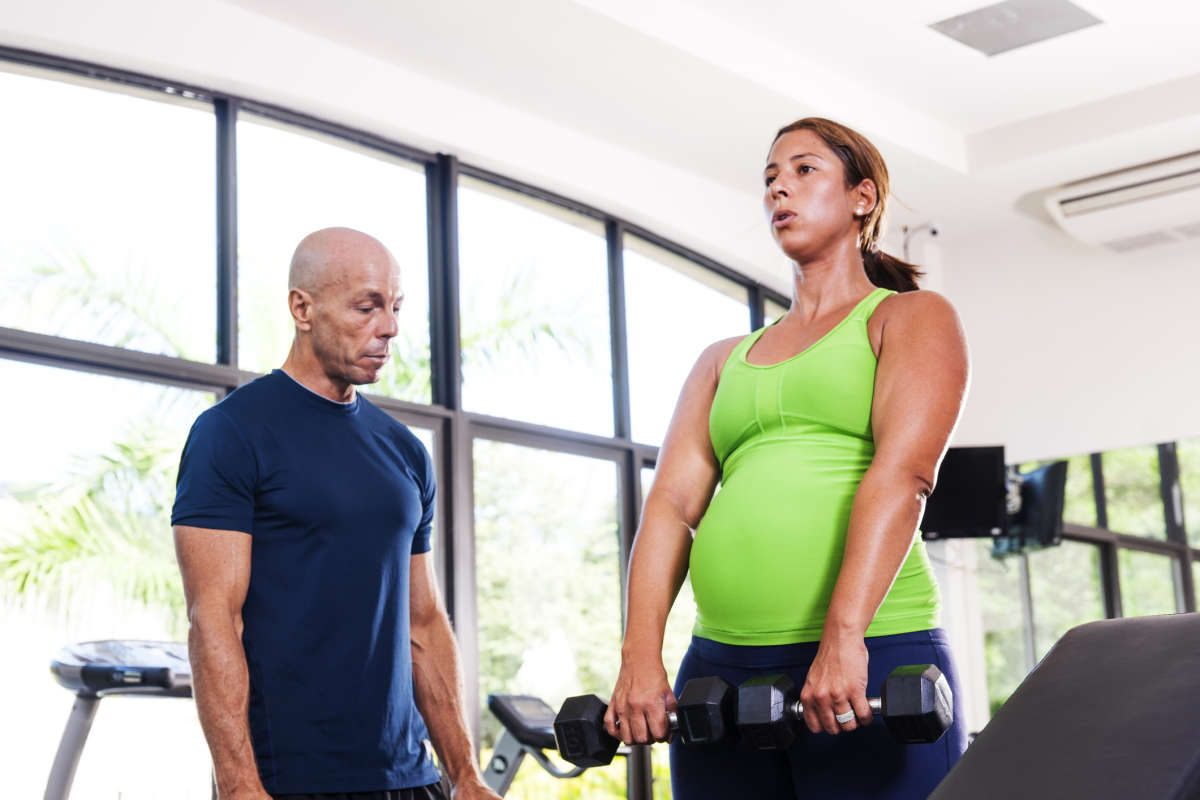 For this feature, I consulted with moms who engaged in pretty intense workouts during pregnancy—with the OK from their medical team, of course. Read on to learn why they refused to let pregnancy stop them from breaking a sweat, and in some cases, their water!

“For myself, through all three of my pregnancies, I was able to work out pretty intensely until the end,” says certified person trainer Kyla Cowell of New York, NY. “I ran a half-marathon at 5.5 months pregnant, did 18-inch box jumps while 36 weeks pregnant and used 40 lb. kettle bell swings at 39 weeks pregnant.”

During her first pregnancy, it was really important for Cowell to stay as active as possible because she had just completed her first IRONMAN, and had another IRONMAN coming up nine months after her due date.

“So, I did not want to fall too far off. And during my second and third pregnancies, I just really wanted to be healthy and strong, as well as set a good example for my two daughters. Aside from the physical benefits that exercise provides, it’s also great for my mind and my sanity!”

She adds: “Going into pregnancy with a strong and healthy body will not guarantee an easy pregnancy, but from my experience it sure made it a heck lot more manageable.”

Dr. Chloe Zera of Brigham and Women's Hospital in Boston weighs in about exercising while you're pregnant.

Boston mom, yoga teacher and Life Coach Jessica Knight did CrossFit her entire pregnancy (and Soul Cycle, until her belly couldn’t fit behind the bike anymore!). She liked CrossFit because, before her pregnancy, she was looking for a physical activity that was more intense than yoga, but wasn’t running.

“Initially, I assumed in my pregnancy I would have to limit workouts, that I would be unable to move by month eight, and be a total slug, but that was not the case at all,” she recalls. “My daughter was two weeks late, and I worked out until the day I went into labor.”

Knight didn't reduce the frequency or intensity of her workouts, but did reduce the weight and the movements as time went on.

“For example, once I started to really show, around six months, I stopped doing burpees or pushups and modified. I took it easy on weight lifting as my pregnancy progressed. I didn't follow a guideline, I just listened to my body. Some days it felt good to squat 100 lbs, and some days it didn't, so I just went with the flow.”

Her doctor said she could do “anything, as long as it was safe.

I chose this doctor based on her great reviews online. Had she not been supportive, I probably would have shopped around for a second opinion. I had read that you can do whatever workout you did pre-pregnancy, so I felt pretty confident she would be OK with Crossfit. I felt really supported. I could not imagine taking 9 to 12 months off of working out!” 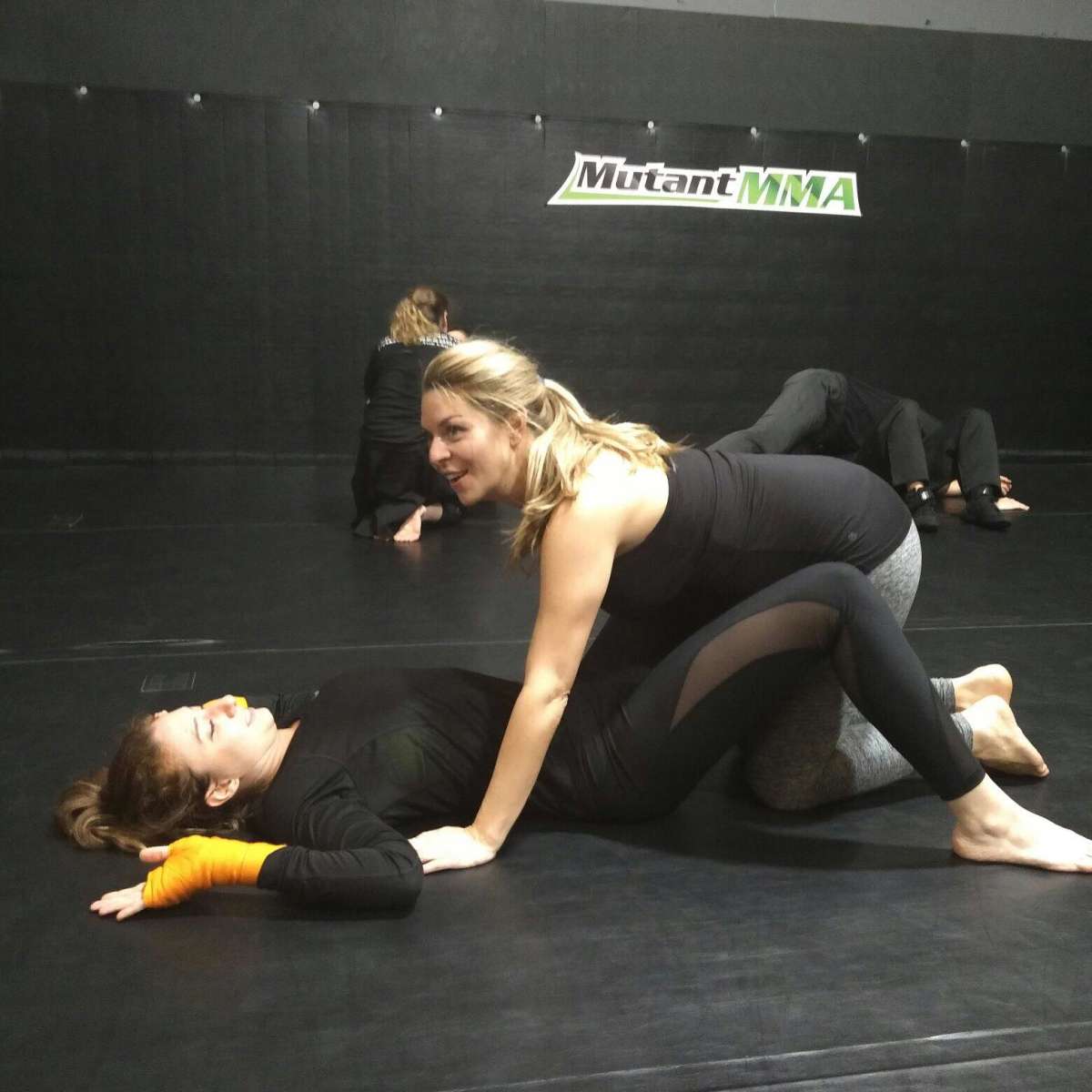 New York mom Arielle Ditkowich-Mogil did Krav Maga (self-defense training used by the Israeli armed forces) through 34 weeks, and has the pics to prove it: big belly and all, mid-take down.

“My doctor told me I could keep going until my body told me not to,” she explains. “My husband was way more concerned than my doctor was! My doctor believed since I had been doing Krav Maga for a year prior to getting pregnant, there wasn’t really risk in continuing, and that my body would tell me if it was too much.”

Grateful for her uncomplicated pregnancy, Ditkowich-Mogil continually checked in with her OB-GYN about her workout regimen at each appointment, and his position stayed the same.

“There were certain rules he put in place, like no holding pads or taking impact. I wasn’t really worried about harming my baby mostly because my instructor is also certified in prenatal fitness, and all of my partners and friends in the program worked with me to make sure I was safe!”

She did stop when her body told her it was enough, “and today I have a healthy, very strong, baby girl.”

“Krav Maga is amazing work out, intense cardio, and great for using my own body to build up muscle. Class goes by quickly, so I’m never bored, and I feel stronger after each class,” she says. “Most importantly, I feel empowered, like I can defend myself and my loved ones should I ever need to—which I hope I never do!”

Of course, every pregnancy is different, and every woman has a different fitness level. If you've never worked out before and want to start, go for it! If you're into an extreme sport -- or any sport -- and want to keep going, that's awesome, too! Just remember to consult your doctor before beginning, continuing or even reducing a workout routine.