Possible Complications of an Assisted Birth

Most cases of assisted birth are perfectly safe for mother and baby. Learn about possible complications, including shoulder dystocia and other delivery problems, and the possible effects on you and your baby.

In the majority of cases, both the mother and baby are perfectly well after an assisted birth, but occasionally complications are encountered.

Problems during the delivery

A condition known as shoulder dystocia, in which the baby's shoulders become stuck during the birth, is more common with a forceps or vacuum delivery. If the shoulders get stuck, simple maneuvers usually release them without great difficulty, but very rarely, a shoulder dystocia can turn into an emergency, and your doctor may have to perform special maneuvers or even an emergency cesarean to complete the baby's birth.

How your baby may be affected

Forceps can leave a temporary bruise on the side of your baby's face and can even put pressure on a nerve near the eyes, stopping the baby from being able to blink properly for a day or two. In contrast, the vacuum tends to leave a bruise on the top of the head rather than on the face (and the head may appear elongated at first where the suction pressure was applied). This can look a little alarming, but it will disappear after a couple of weeks. More severe complications for your baby, which can include a fractured skull bone after a forceps delivery, or bleeding inside the skull after a vacuum, are very rare.

How you may be affected

You're more likely to be given an episiotomy cut, particularly during a forceps delivery, to protect your back passage from more severe damage during the birth. This is usually successful, but in some cases an extra tear may occur in the back passage and careful stitching, after delivery is required to repair the area. Stitches may also be used if you get other tears in or around the vagina. 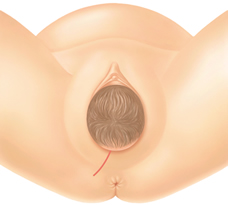 A medio-lateral cut is usually done into the muscle, angled away from the vagina and the perineum.